Dong Ap Bia (the Mountain of the Crouching Beast) stands 14 kilometres west of A-Luoi, a small town nestled in the central highlands of Vietnam. Officially called Hill 937 by the US army, it was the site of one the most famous battles of the Vietnam War in May 1969 … known thereafter as ‘Hamburger Hill’.

“Have you ever been inside a hamburger machine? Well we just got cut to pieces by extremely accurate machine-gun fire.”

For some people, Hamburger Hill became a symbol of the bravery of both the attacking American infantry and the North Vietnamese defenders.

For others it epitomised the futility and waste of this long war. 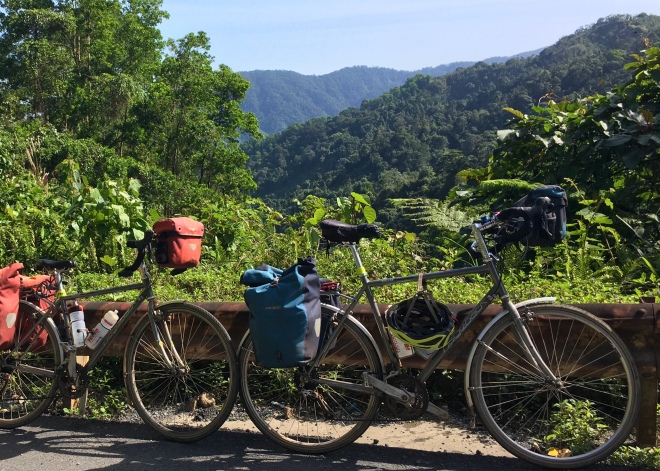 On the day we crossed back into Vietnam from Laos we stayed overnight in A-Luoi.

Waving goodbye to Mr Poh and his school bus we had spent the afternoon cycling down through high jungle to join the Ho Chi Minh Highway. This road follows the route of the famous Ho Chi Minh Trail, a network of mountain footpaths that were used to supply and reinforce Vietcong fighters in the south. The attack on Hamburger Hill was part of a campaign to stop this supply.

The ‘Rakkasans’ from the 101st Airborne (one of the US Army’s most decorated units) fought their way up the steep slopes battling with triple canopy jungle and waist high elephant grass as well as the machine gun fire. They were repelled again and again by the ‘Pride of Ho Chi Minh’, the elite North Vietnamese 29th regiment.

After dropping more than 1000 tonnes of bombs, 140 tonnes of napalm, 31000 rounds of 20mm shells and 500 tonnes of teargas, the Americans eventually prevailed and took control of the ‘moonscape’ that was left of the summit. 72 Americans lay dead with 370 wounded. Estimates of North Vietnamese losses vary, but at least 600 were killed.

The Americans only stayed for a couple of days before they abandoned Hamburger Hill. A few months later the North Vietnamese were back in their original positions.

It was the apparent futility of this battle that whipped up the anti-war sentiment that was then building a strong head of steam in America. Senator Edward Kennedy reflected the view of many people when he called the battle “senseless and irresponsible”.

At the time of Hamburger Hill, America had over 500,000 troops in Vietnam but this turned out to be the high water mark of their involvement. By the end of 1969 US troops had begun to withdraw and their focus had switched to training the South Vietnamese army to bear the brunt of the fighting. This eventually led to the North Vietnamese victory in 1975.

Today both the hill and the whole area is very peaceful, mountain rice growing in the valleys and birdsong replacing the sound of gunfire in the hills.

It’s difficult to imagine the horror that both sides endured. Except that the landscape is very familiar to anyone who has watched a few Vietnam War films. So familiar that you almost expect to see an Apache attack helicopter appearing over the next ridge.

As we cycled around the country, we enjoyed learning a little about the ‘American War’ (as it’s known in Vietnam) from their perspective. The War Remnants Museum in Saigon is a stark reminder of the hardships and atrocities faced by ordinary people. The tours to the complex multi-level network of tunnels at Cu Chi show off the ingenuity of the Vietcong and the difficulty the Americans had in facing an enemy that kept melting away. And Tank 390 still guards the grounds of the presidential palace, having crashed through the gates on April 30th 1975 to end the war.

Ultimately though, we have been left with a feeling that this war of attrition became senseless. For everyone involved.

A-Luoi was the most undiluted Vietnamese town we visited. We stayed in a motel style guesthouse, no-one we met spoke English and it was tricky to find somewhere to eat. We walked past lots of beer gardens and coffee shops but no restaurants.

Eventually we managed to find a large bag of pistachio nuts and headed into a family run café to enjoy them with a beer. The family had just finished their own dinner so, more in hope than expectation, we made eating signs to the lady. She must have seen our faces drop as she shook her head because she disappeared, returning fifteen minutes later with a big smile and two steaming bowls of noodles, packed with chicken, vegetables and fresh salad.

It was one of the most delicious meals we had in Vietnam. Much better than the hamburgers we’d been hoping to find … in tribute to the nearby hill!

To her obvious delight we gave her half our remaining pistachios. It seemed only right. The bag had cost us more than she insisted on charging for the meal.

The next day’s ride down to Hue was one of best days we’ve ever had on a bicycle. Under a cloudless sky we wound our way down through stunning jungle canopy, up over a pass then down again into the wide fertile valley of the Perfume River (named for the flowers that drop into its clear waters).

It was the kind of day that reminds you that the simplicity of bicycle touring is one of the best experiences in the world.

“It is by riding a bicycle that you learn the contours of a country best, since you have to sweat up the hills and coast down them.”

People we’d met on our travels had told us that Hue was a bit of a disappointment. Well we beg to differ, we loved it.

It was the imperial capital of the last emperors of Vietnam, the Nguyen dynasty that ruled from 1802 to 1945. Today it is a vibrant, bustling city that blends old and new, wide embankments on both sides of the river giving it an air of calm.

The main attraction is the citadel, home to the Nguyen emperors and their seat of government. Several walls are pockmarked with bullet holes as an evocative reminder of the major battle that raged here in 1968 during the Tet offensive.  Most of the buildings were destroyed but they are now being lovingly restored to their former glory. It’s a huge site and a wonderful place to get a little lost in, roaming through tree-lined boulevards, ceremonial reception rooms and ornate gardens.

A few kilometres upriver from the Citadel is another poignant reminder of the conflict. Tucked away in a corner of the Thien Mu Pagoda complex is an old 1956 Austin saloon car that transported a monk called Thich Quang Duc to Saigon, where he calmly set himself on fire as a protest against the policies of the South Vietnamese regime. Captured by an American film crew it became one of the most emotive images of the war.

We also enjoyed the tomb of Tu Duc, emperor at the time of the French invasion in 1883 and a man who lived a life of imperial luxury and carnal excess (104 wives, countless concubines but no offspring). Just 5 foot small he decreed that the statues of the mandarins guarding his tomb had to be even smaller than he was.

But he wasn’t buried here. Instead he was interned at a secret location where the 200 servants who helped with the burial were beheaded to stop the location and its treasures being discovered. It worked … the site has never been found.

One entertainment enjoyed by Tu Duc were the fights between tigers and elephants at Ho Quyen, a mini Romanesque amphitheatre that now sits in the middle of a quiet suburb. The tigers had their claws and teeth removed so that the elephants, a symbol of the emperor’s power, could triumph every time!

From Hue, we cycled 160km down the coast to the graceful and historic town of Hoi An, full of preserved merchant houses, ancient tea warehouses and Chinese temples.

At first, the road took us past miles and miles of sand dunes all filled with thousands of graves and elaborate private family mausoleums. These are the final resting places of Viet Kieu (overseas Vietnamese), all seeking to be buried in their homeland.

Ancestors are worshipped in Vietnam and the majority of people are buried, often in large tombs on the family small holding. Given that the population has doubled to 99 million since the end of the war in 1975 (it’s now the world’s 15th most populated country), the density of tombs of this ‘road of death’ did make us wonder whether the rest of the country would look the same in future, such will be the demand for graves.

Just north of the large coastal city of Danang is the Hai Van (Sea Cloud) pass, a mountain spur than runs down to the sea and a sizeable cycling challenge at 496m high. It’s an important North-South divide both strategically and geographically, protecting Danang from the fierce ‘Chinese’ winds that sweep in from the north east.

The main artery of Vietnam, Highway 1, used to run over this pass but today there is a 6.3km long tunnel. Unfortunately, neither livestock nor fuel are allowed through the tunnel so we had to stop frequently to avoid the trucks full of pigs and petrol, recklessly overtaking each other on the hairpin bends.

Further entertainment was to be found at the Marble Mountains south of Danang, five craggy marble outcrops named for the five natural elements (water, wood, fire, metal and earth). Each one has an army of statues for sale at their base – from the ever-popular Laughing Fat Buddha to replicas of the Venus de Milo. The actual marble in the mountains is now exhausted … so it’s imported from China instead.

In Hoi An we were suddenly surrounded by tourists. Not surprising as it’s a delightful place, especially at night when the roads are closed to traffic and the town is lit up by thousands of lanterns. This makes it feel slightly like a Disneyland version of itself … but creates a fun atmosphere.

As well as a few of the 800 historic buildings we enjoyed traditional Vietnamese food, traditional music and dance and traditional water puppets. Much to our amusement each show was wrapped up by a rendition of Auld Lang Syne, sung in English. And no, they didn’t know the words either!

Perhaps our most magical moment in Hoi An came early one evening as we cycled around the paddy fields that encircle the town. A light sea breeze had blown up and several groups of grandparents (who would have known the horrors of the war) emerged onto the pathways that criss-cross the fields to enjoy flying kites with their grandchildren.

The air was filled with colour and laughter. It was a bewitching scene and one that made the American War seem like a very long time ago.

Apologies – we’re a little bit behind with this blog.

We cycled from the Laos border to Hoi An between 23rd and 27th February. We’re now safely back home, having left Vietnam a few days earlier than planned when the Covid-19 virus made cycle touring a little complicated. We’ll tell that story in the next post.

3 thoughts on “From Hamburgers to Noodle Soup”