We only started to get worried when the border guards summoned the bossman to examine our passports for a third time, all stern and officious in his crisp green Vietnamese army uniform.

Quite reasonably, they were on high alert for the coronavirus.

Our temperatures had already been checked and two masked officers had carefully scrutinised our passports, checking and double checking each stamp to make 100% sure we hadn’t recently been to China.

A few days before, we’d read that some travellers had been turned away from remote borders (such as this one at Lalay) if they had a Chinese visa in their passport, no matter how out of date it was. Andy has three Chinese visas (a legacy from his old job), the most recent of which expired in 2015.

First the bossman studied the front of Andy’s passport to make sure of his nationality. This was quite amusing as most of the lettering had worn away and become impossible to read. He was only satisfied when we persuaded him that, honestly, it was the same type of passport as Clare’s and therefore came from the same country.

Then he painstakingly examined every single entry and exit stamp whilst his junior colleagues gathered around pointing and shaking their heads. Andy has 94 stamps in his passport, so this took quite a while.

Eventually and with enormous relief, as much for him as for us, he looked up and smiled … “Welcome to Vietnam!”

It’s not that we wanted to leave Laos. It’s that we’d like to head home in a few weeks time and crossing back into Vietnam makes that a whole lot easier. Plus … we really felt like we were in the middle of nowhere!

The people of southern Laos are amongst the most laid back individuals we have ever met.  Guided by Theravada Buddhism which emphasises ‘the cooling of human passions’, they don’t get too worked up about the future, considering it to be determined by karma rather than by devotion or hard work. They also believe that ‘too much work is bad for your brain’ and feel sorry for people who ‘think too much’. 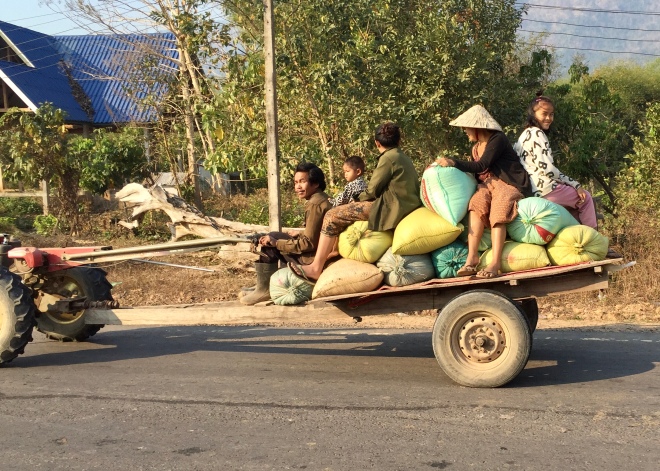 The people we’ve met in Vietnam and Cambodia appear to be quite driven by comparison. It’s neatly summed up by a French saying:

‘The Vietnamese plant the rice, the Cambodians tend the rice and the Lao listen to it grow.’

But they also come across as a happy bunch. Unless any activity, work or leisure, contains an element of fun, it’s not worth pursuing.

It was very easy to be seduced into the laid back life of Si Phan Don, literally meaning ‘Four Thousand Islands’. Here the Mekong bulges to a breadth of 14km, slowly easing it’s way past a few large inhabited islands and many islets and sandbars, then rushing down a series of rapids and waterfalls.

This natural barrier gives the Mekong it’s special charm – it’s one of the world’s great rivers meandering 4350km from the Tibetan Plateau to the South China Sea, but it can never become a shipping super-highway.

We enjoyed some gentle days pottering around the three main islands of Si Phan Don (Don Det, Don Khon and Don Khong), gradually becoming more proficient at manoeuvring our bikes on and off the small longtail boats and more chilled about doing so. 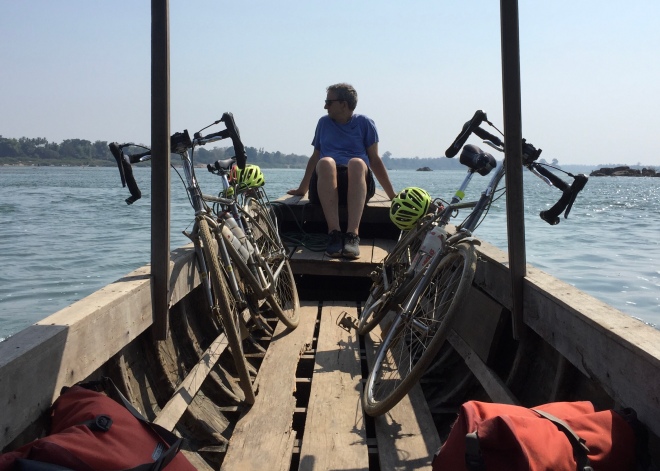 We came to love the Mekong so much we even made our own tribute to it. Late one afternoon, Andy dived into the refreshing cool water without realising he had some cash tucked in the pocket of his swimming shorts, never to be seen again.

From Don Khong it was a sweaty and dusty ride 110km up river to Champasak where we enjoyed two lovely surprises.

The first surprise was Wat Pho (meaning Mountain Temple), a contemporary of Angkor which stretches up the slopes of Phu Pasak, a sacred mountain known locally as Mount Penis. It’s a quirky, tumbledown place with attractions that include a crocodile stone carving allegedly used for human sacrifice and a sacred spring that cows now clamber up to for a holy drink.

The second surprise was to hear our names being bellowed out as we cycled back to Champasak. Unbelievably it was Richard and Sue, good friends from home. We’d planned to meet up in Vietnam in a few weeks time but neither of us had any idea that we’d both be in this part of Laos at the same time. It was really good to see them and to spend an evening of easy conversation over beer and pizza.

From Champasak, we changed plans and decided to cycle up to Paksong on the Bolaven Plateau, 1300m above sea level and famous for it’s waterfalls and it’s coffee plantations.

In the event, Andy very nearly messed it up!

The road he’d planned to go down was the wrong road. Very wrong indeed. It quickly disintegrated into a very rough, very dusty stone track.

For about an hour, we bumped and banged our way down it almost killing our bikes and ourselves in the process. Andy was ever hopeful it would improve on the other side of the next ridge despite Clare’s increasingly frantic protestations. Eventually he had to admit that it was physically impossible for us to go any further.

We turned around and slowly climbed back up.

By the time we got back to the top, we’d run out of time and daylight so were forced to find some emergency accommodation and try again the next morning.

This time we found the right road … and it was glorious! Just what we’d dreamed of. Even when crossing the Pyrenees or the Andes we have never cruised down such a long descent, the gradient gently taking us through coffee plantations, past mango groves and fields of cassava. For 50km!!

It ended in a serene little village called Tat Lo. In recent years, this has become a quiet retreat on the backpacker trail, nestled in a river valley full of forest trails, small waterfalls and swimming holes. It’s location is remote enough for the small guesthouses and cafes selling banana pancakes to sit alongside normal village life, not to overwhelm it.

We stayed in a simple, stilted room in a lovely guesthouse called Palamei, owned by Poh and Tim and named for their daughter.

We’ve enjoyed a wide range of accommodation on this trip, including a couple of luxury hotels as the coronavirus scare has made everything so cheap … but this was one of our favourites.

We always knew that getting back into Vietnam from this part of Laos was going to be the greatest challenge of our trip.

We looked at various options, including cycling back to Pakse and taking a long sleeper bus ride north to Savannakhet and onto Hue in Vietnam via the main border crossing at Lao Bao. A journey of over 700km this was not a fun prospect for two aging touring cyclists.

We also knew that cycling up to the remote border at Lalay (only 170km away) was beyond our cycling capabilities. It would mean three days of riding over some very steep hills with few towns or villages along the way. A great ride for proper (young) adventure touring cyclists … but not for us!

Poh asked which day we planned to leave. When we told him it was Sunday his face lit up. His van normally serves as the local school bus but Sunday meant no school.

So that’s what happened. It turned out to be a fascinating journey through a dramatic mountain landscape, the school bus struggling to make it up some of the steeper inclines as we gave grateful thanks to the cycling gods that we weren’t pushing our bikes up instead.

During the drive up to the border and over a bowl of noodle soup, Poh shared some stories of his life. Born into desperately poor circumstances, he spent several years as a child living in the village temple as his mother had died when he was just two years old. With only rudimentary schooling, he recognised his one good fortune was to be born in a village that was starting to attract tourists, so he worked 16 hour days in a nearby lodge to learn both the business and how to speak English. Eventually he was able to set up his own guesthouse.

Poh and Tim, his wife, have three children but they have also adopted five more, all from the same tough circumstances he knew as a child. Now he is giving back to his community, one small part of which is providing the local school bus.

The journey passed quickly and before long, we found ourselves at the border to be greeted by the smart Vietnamese guards and the medical team.

It’s just as well we didn’t cycle … we’d have been so hot and bothered we’d have failed the temperature test. Then they’d never have let us back into Vietnam!

13 thoughts on “Laid back in Laos”