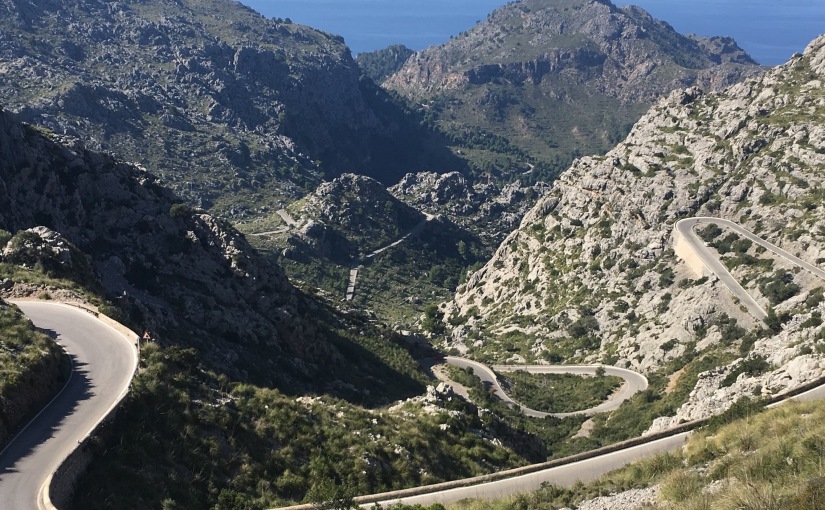 The first riders flew past as we turned the corner into a quiet country road that ran down a stunningly beautiful valley. It was three days into our bicycle tour around the island of Mallorca and we had just reached the north-west, one of the world’s most popular cycling destinations.

This back road turned out to be a home run for many serious cyclists who were coming down from an epic day of climbing through the Serra de Tramuntana mountains. In groups of two, three, four, even ten riders they effortlessly cruised past us, calling out a cheery ola or vamos before disappearing down the road. Some of them couldn’t hide their surprise at the unlikely sight of our bulging bike panniers on this unofficial racing circuit.

A loud whirring sound announced a much bigger peloton of about thirty riders cresting the hill behind us. They were moving very fast! For Andy, the opportunity to join in was too much to resist so I moved up a gear and accelerated, legs pumping furiously, sweat dripping from my helmet and the panniers almost jumping off my rack. As I was swept up round the next bend, all Clare could see was a yellow helmet disappearing into the pack and out of sight.

This was my first experience of riding in such a large group of cyclists and the sensation was exhilarating! It seemed like twice the speed for half the effort as I was sucked into a pocket of air created by the riders in front. As the road twisted and turned down towards the coast, we rode at a much faster pace than I was used to. I can now understand why so many riders in the Tour de France shelter in the middle of a big group all day.  It’s so much easier!

Feeling like a real cyclist at last, I held a position in the middle of the group for several kilometres before slowly slipping to the back as the weight of my panniers began to take their toll.

It was only then that I glanced down at my phone and spotted several missed calls from Clare. Oops! Much to the amusement of the other riders, this meant an abrupt end to the fun as I thanked them and jammed on the brakes.

It’s true, I had heard a loud cry of alarm from Clare as I’d first raced off but had dismissed it as one of the “don’t be so **** stupid” variety. Surely, she can’t be lost? There weren’t any other roads to go down.

As luck would have it a large thorn had popped open her front tyre at exactly the same moment I’d accelerated away to join the peloton.

This would normally have given her an opportunity to practise her newly acquired bike maintenance skills but that very morning she’d taken the spare inner tube out of her saddle bag. Apparently it was getting in the way of her large store of snacks! Instead, the tube was in one of my panniers now several weary kilometres down the road.

So ended my only experience in a peloton. When I told her about it, Clare quickly decided it wasn’t for her … “I want to use my own energy thank you very much. I don’t want to be crushed by a pack or pulled along by anyone else.” The spirit of a true independent touring cyclist!

This incident was part of a delightful 10 days we recently spent cycle-touring around Mallorca. It’s a wonderful place to explore on a bike, especially in the Spring or Autumn when it’s usually pleasantly warm and sunny.

If you followed our ride from Bath to Barcelona last year, you’ll know that we were planning another longer bike tour this Autumn. As it turned out we weren’t able to get away for long enough, so a ride around Mallorca was a perfect short break instead.

Only last summer the Telegraph ran a feature on Mallorca under the headline:

Is this the world’s greatest destination for cycling?

It could be … the island attracts over 150,000 cyclists a year including many world class teams who love it for pre-season training.  Most are real cyclists from flat countries attracted by the spectacular climbs in the north and west. Indeed, there are so many people peddling up and down the more famous climbs that it can feel a bit like a ski resort … with cyclists replacing skiers.

These climbs are not so long or so steep to put off the humble older touring cyclist. Perhaps emboldened by our trip through the Pyrenees, we spent several days in the Mallorcan mountains and really enjoyed it.

You don’t have to hit the hills though as there are plenty of beautiful, quiet, flatter routes around the coast and across the interior. With lovely places to stay, wonderful food to eat and plenty of interesting things to do off the bike, Mallorca is an ideal destination for touring.

But surprisingly we only saw one other cyclist with panniers.  Perhaps this blog will inspire more people to take a bicycle tour round the island – it’s a great place for a first trip.

Here’s our route, we’ll let you know how we got on in a few days’ time.