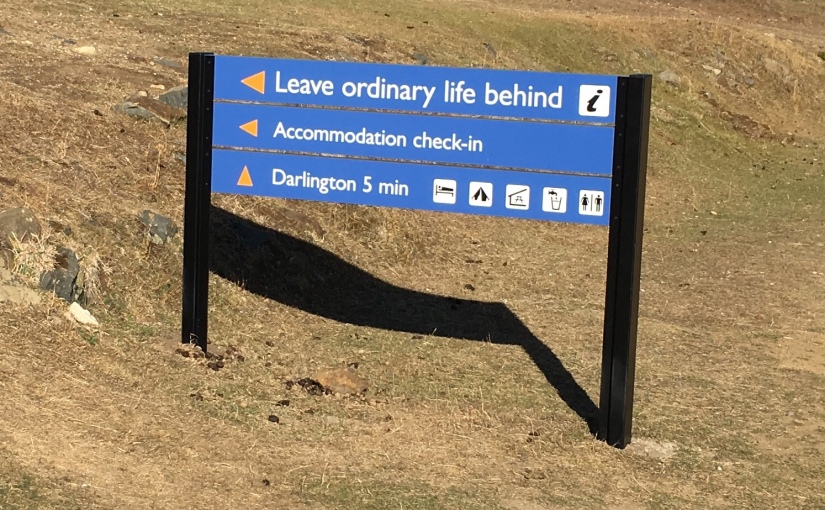 Leave ordinary life behind … that’s all they ask of visitors to Maria Island. And it’s an easy thing to do.

Maria Island is a Unesco World Heritage site. It’s a carefree, car-free haven for walking, biking, camping and watching wildlife with not a single shop, cafe or ice-cream kiosk in sight.

We loved leaving ordinary life behind so much that we decided to camp on for a second night … stretching out the pasta, chicken, cereal and red wine that we’d brought with us.

We loved watching wallabies, wombats and the strange looking Cape Barren geese grazing around our tent as we cooked. And we absolutely loved stumbling across a herd of over 50 kangaroos quietly grazing on a headland against the setting sun.

We heard (but didn’t see) Tasmanian devils shrieking at night. It was fortunate that they weren’t too close, as the rangers had told us to cover up our bike saddles so little devils couldn’t eat them.

The island has a colourful human history too. It endured two brief periods as a penal colony for re-offenders but, after repeated escapes, was closed in favour of the more secure Port Arthur.

An ill-fated attempt by a colourful Italian entrepreneur called Diego Bernacchi to develop industry, agriculture and tourism didn’t last long either. His large cement works once supported over 500 people with hotels, shops and a tramline. It never came close to break-even and collapsed in the 1930’s Great Depression.

This has left an eclectic mix of ruined buildings on the island. 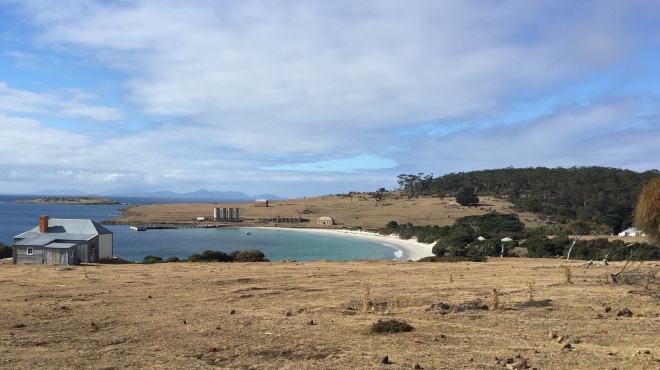 A small museum vividly brings to life the experiences of all the people who lived there, both the incarcerated and the free. One diarist was William Smith O’Brien, an Irish MP and a leader of the Young Irish movement that fought against the potato famine amongst other injustices. He was imprisoned here in 1849, before being sent to Port Arthur and eventually pardoned some 7 years later.

As well as describing a failed escape attempt on a whaling boat, he laments his fate to be cast so far away from his loved ones. So far away, that he was on a small island, off the coast of an island, which was itself off the coast of Australia.

We could sense his isolation. 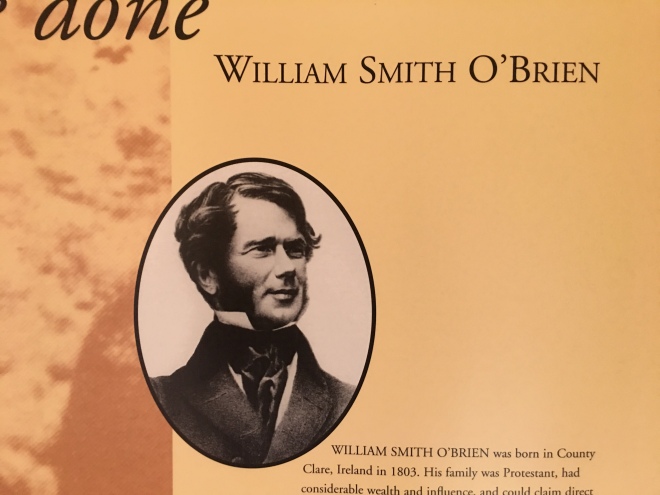 These were our last few nights camping, as we’re sending our stuff back to Melbourne before we head to the colder mountains in the west.

Camping on Maria Island has made buying and carrying all that gear worthwhile. The tent is a great design and the sleeping bags are warm and cosy. But the air mattresses are seriously embarrassing in the stillness of the night. They squeak so loudly whenever we roll over or so much as move a muscle.

As a man of a certain age, Andy is forced to go to the loo once or twice a night. Not known for his agility, this becomes quite a performance, especially with the noisy mattresses. It’s no wonder the devils stayed away from us!

Fortunately on clear moonless nights the stars have added to his relief. The night sky seems so much more intense down here … especially the Southern Cross and the wide sweep of the Milky Way, a pearly rainbow from one horizon to the other.

We recently learnt the reason for this. In the southern hemisphere you look down into the centre of the Milky Way, whereas in the north, you’re looking out to it’s edge. 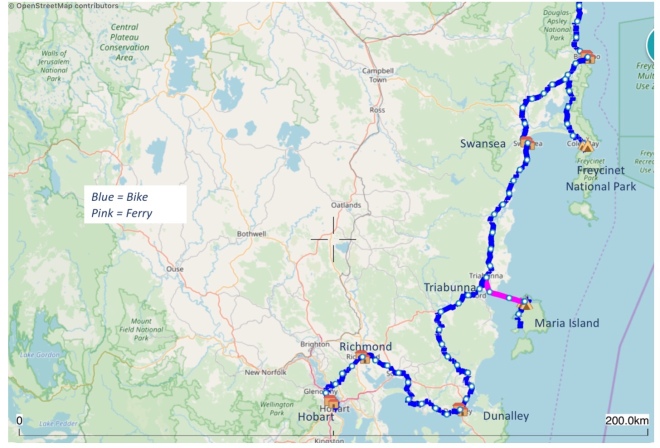 Saying goodbye to Maria Island on the early ferry, we headed south across country to the small village of Dunalley. This turned into one of those cycling days that are more than we bargained for.

It was actually over 50km of cycling on ’ripio’ gravel roads! And the road went uphill! And it rained! And Clare got stung by a wasp (presumably one that had followed us expecting yet more honeydew)!

But … she stayed impressively cheerful as you can see from these pictures, just very relieved to be back on firm, black tarmac.

The wildlife surprised us yet again. We turned one corner and disturbed a large flock of bright green and red parrots who launched themselves up into the sky in a colourful, noisy, irritable carnival. Later it happened again, this time with scores of white cockatoos swirling in front of us like confetti.

A sadder feature of this road was that there was even more roadkill than usual, in various states of decay … small kangaroos, wallabies, possums and (just once) a snake. It made for a pretty stinky ride!

Roadkill is much more noticeable on Tasmanian roads than on the ‘mainland’, but the locals tell us that this also proves the populations are healthy. 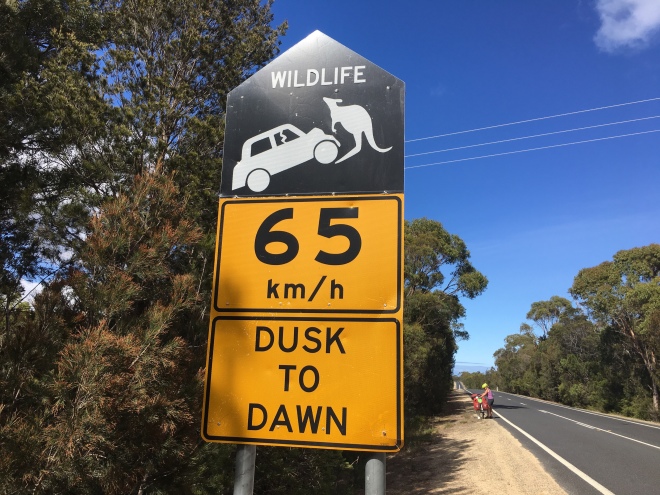 Another feature of country roads are the house numbers. Anyone fancy living at number 29762? The next house a few kilometres down the road might be 25640. This seems confusing until you discover that a new number is allocated every 10 metres. 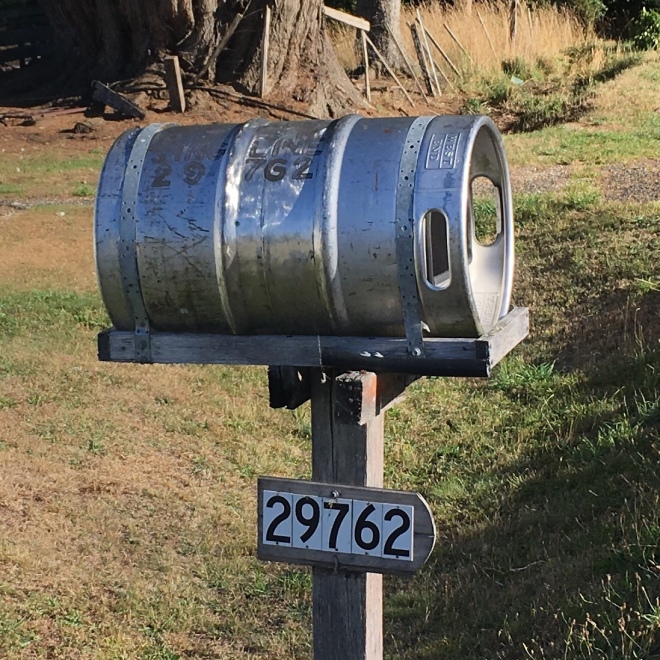 This house is therefore 297.62km from the end of the road in Hobart … a handy way of measuring our progress.

At the end of this particular gravel road was a welcome B&B in a lovely old colonial house. We’ve noticed a few interesting touches that seem to be particular to Tasmania B&B’s … heating lamps in the bathroom ceilings, washing machines and a complimentary decanter of sherry and port to “help you sleep”. 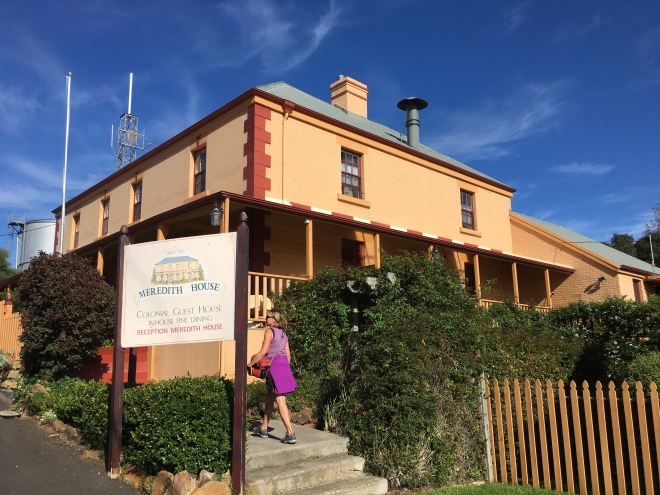 From Dunalley we rode along the coast to Richmond, a pretty town famous for being the site of Australia’s oldest bridge (convict built of course). Then onto Hobart where our son Chris has joined us for a few days rest and recreation.

Next up is the challenge of the mountainous, wet n’wild West Coast and the road up to Cradle Mountain, the highest point on our circuit.

The weather has turned and there’s a storm on the horizon. Winter is coming!

It doesn’t look like life for the next two weeks will be ordinary at all.

14 thoughts on “Leaving ordinary life behind”