“Ah oui, it’s very difficult to find epingle a nourrice in France!” said the helpful owner of the launderette where we were gratefully washing our smelly cycling clothes. You’re not kidding! We’d already been to four shops (2 chemists, a haberdashery and a small supermarket) all with no luck. The elusive item we were seeking? Nothing more than safety pins.

So it became a quest.

He directed us first to another haberdashery (too arty) then to Galeries Lafayette (too posh) before we traipsed to the edge of town and found them in a much bigger supermarket. Seven shops, over an hour later but we had eventually triumphed! 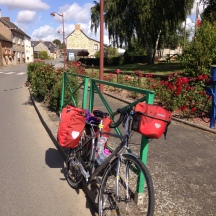 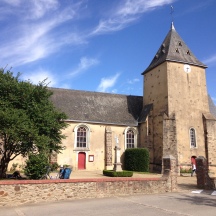 Everything is difficult to find in rural France on Sundays and Mondays. Shops (except for fresh bread of course), restaurants, hotels – tout est ferme. It transpires that the 35 hour working week is to blame. Restaurants keep their doors firmly shut instead of paying overtime rates or hiring extra workers. As Monday is the quietest day, all the restaurants in town are closed on Monday.

It was a little eerie. The villages we cycled through were picture perfect and beautifully cared for. Lovely old churches and squares, flowers adding colour and freshness to public spaces but usually empty and silent. In some places we didn’t see a single soul, in others just a lone dog walker.

We arrived in Angers on Tuesday (Day 8) gaping at busy streets, open shops and restaurants filled with young people. Like two country bumpkins overwhelmed by a first visit to the big city.

It was hard to find a hotel in Angers.

This is not because there are a lot of tourists. On the contrary, many businesses have seen visitor numbers decline by 30% since the Paris attacks (in Paris itself some hotels are 70% down). In Angers, there’s also a local impact as recent tourist developments up river mean less people are coming this far west.

It’s shame as Angers has much to offer, including a wonderful 13th century castle that has not been sacked in some ancient war so still retains its internal buildings. One of these houses the 100m long Apocalypse Tapestry, completed in 1382, showing scenes from the Book of Revelation. We were most struck by the seven headed beast of the sea meeting with the seven headed dragon. 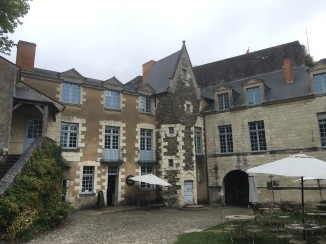 Angers is a young city full of the next generation of French doctors, business leaders and administrators. As well as some of the best universities in the West of France, there is also a large fonctionnaire (civil servant) teaching centre filling hotel rooms from Monday to Thursday. We were lucky to get a cancellation – visit at the weekend or in July/August when there’s plenty of space.

We thought we had made it to the end of Stage 2 and the Loire but our celebrations were cut short when we realised this river in Angers is only a tributary, the Maine. The Loire was slow to reveal itself on Wednesday (Day 9), emerging as a wide lazy river, meandering gently through open countryside and nature reserves. We did the same, dawdling along in the late afternoon heat until we realised the only hotel we could find was another 20km up river.

Knowing that the chef would clock off promptly at 9pm, we sped up for a sustained burst of pace (25km/hour) that almost made us feel like real cyclists. It was glorious, only marginally spoiled by a bigger river tempting out a lot more flies for their early evening swarm. It was a bit like cycling through a hail storm.

So why did we need the epingle a nourrice? Well, Andy has yet to find some cycling shorts that meet his exacting standards so he is still wearing his old favourites with a broken zip, held up by gorilla tape and safety pins. They are essential spare parts!

We are now in Saumur where there are reputed to be more than 200km of tunnels stocked with wine. What will be doing for the next few days?

10 thoughts on “Searching for Safety Pins”