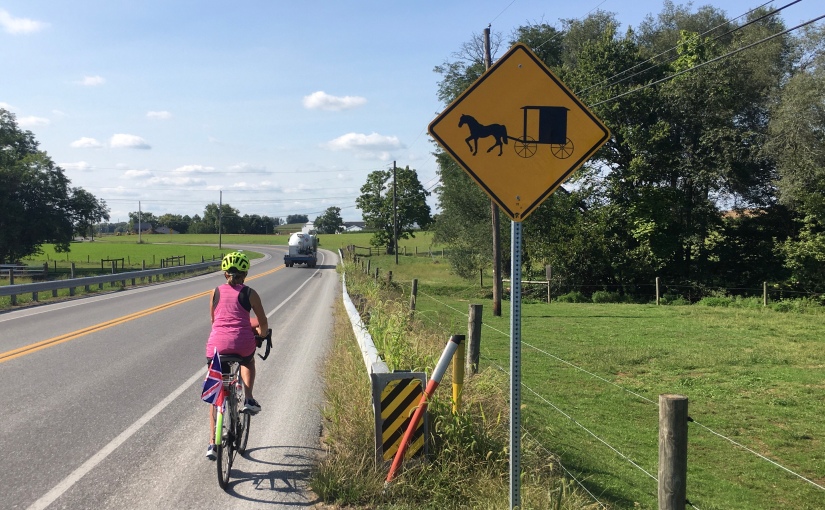 On cresting the top of a small hill, an Amish horse and cart suddenly pulled out right in front us.

Pausing to enjoy this unusual sight, we swept down the hill behind them. It was easy to catch them up, then cruise past with a wave and a polite nod in return. But the road turned sharply upwards and our legs soon became no match for their horsepower.

Once again we overtook them on the next descent, once again they easily passed us on the next climb. Did we see the hint of a smile? Probably not, the self styled plain people don’t believe in gloating!

We were cycling on the backcountry roads of Lancaster county in Pennsylvania, between the small towns of Oxford and Strasburg. This is the beating heart of Amish country with a community of around 43,000 living and farming here, the largest group in America.

Horse drawn buggies are the family saloon of the Amish world. They are normally enclosed grey boxes with enough space for mum, dad, a few kids and the weekly shop.

The open cart we tried and failed to race is a traditional 16th birthday present given to a young man to take his sweetheart out for rides through the local covered bridges. Not for nothing are they known as ‘date buggies’ and ‘kissing bridges’.

We passed scores of identical farms each with a weatherboard house, a barn, a grain silo or two and a washing line full of simple, old fashioned clothing swaying in the breeze.

No cars, no motorbikes and no other ‘English’ people (all outsiders are known as ‘the English’ to the Amish.)

After a while buggies became so common they were unremarkable. More striking were the traditional single room schoolhouses, a young female teacher bravely managing a single class of 6-14 year olds. As were the horses ploughing the fields or carrying away newly cut corn.

It was a magical experience. A peep into another world.

Locals tell us the Amish are a happy community, living at peace with themselves and with their ‘English’ neighbours. Few young people are leaving and the population is increasing quickly.

But they do have many idiosyncrasies.

Take their attitude to bicycles!

The Amish are famous for rejecting most forms of modern technology, although it’s a little more nuanced than that. New technological innovations are carefully considered by the elders of each community, both for the value to their way of life and the potential disruption.

On the face of it, bicycles are a perfect low tech mode of transport. Indeed, they are used extensively by Amish communities in Illinois and Indiana. There’s even a group in Ohio who have embraced e-bikes.

But in Lancaster County, bikes are banned. Instead both children and adults get around on specially designed scooters.

It’s difficult to find out why this is …

Some say the decision was made in the late 1800’s when the bicycle was first invented. At the time they were expensive and impractical for the rough 19th century country roads. Once a decision has been made here, it’s hard to get it overturned. Precedent is a powerful thing!

Others say that the bicycle has the potential to take young people too far away from home.

And others that the humble scooter has now become an symbol of Amish life in Lancaster County, together with beards, buggies and bonnets. Much too important to be superseded by bicycles.

We’ve decided to stick with our bikes!

After crossing the estuary from Cape May, we stayed in Rehoboth Beach, home to President Biden’s ‘Summer White House’. We then cycled for three days through the sorghum, sweetcorn and pigeon-pea fields of rural Delaware before heading up to Lancaster. It all felt green and clean, gentle and well organised.

Most of the ride was in delightful early fall weather … sunny days, not too hot, a softness to the air.

But we did get a complete soaking in northern Delaware and had to take cover in a small copse of trees for an hour or so. This also gave Andy an opportunity to try out his new piece of kit … a bright yellow rain cape, ideal for proper American rain.

Clare says he looks like the worst touring cyclist she’s ever seen, especially as the cape inflates like a balloon from behind.

Andy has also experimented with a major change to his bike … some trekking or butterfly handlebars.

She’s decided to stick with her drops … and her rain jacket. Once she finds something that works for her she doesn’t much like change (which Andy secretly thinks is just as well.)

We left Lancaster and the Amish to cycle up the Susquehanna River into industrial, upcountry Pennsylvania. Close to Harrisburg, we passed the haunting remains of Three Mile Island, the site of America’s worst nuclear accident in 1979. Now closed, the decommissioning process should be completed by 2079!

We popped into McCleary’s pub in Marietta, and ended up staying all evening, talking politics at the bar and then dancing to some classic American tunes from a great live band.

Pennsylvania is a ‘swing state’ often switching back and forth between Republicans and Democrats. The senate race for the upcoming mid-term elections in November could even decide the overall balance of power.

Perhaps because it’s election time, we’ve found that lots of people here are keen to talk about politics and the divisions they see in American society today. Over the last few days we’ve heard the full range of political opinion … from Trump supporters to mainstream Republicans to Democrats and some Independents.

Whilst there’s little agreement on how things should be done, we’ve noticed that what people want is often much the same. The list of things people reel off usually includes fair rewards for hard work, a safe and peaceful place to live, opportunities for their children etc.

But most people here do seem worried that political differences are increasing and becoming more divisive.

We’ve now arrived in Gettysburg, one of the most famous symbols of the American Civil War. Sometimes called the ‘Brothers War’ (as friends or even family members found themselves on opposite sides), it was a time when political differences led to a brutal, bloody conflict.

Gettysburg was a humbling place from which to watch Queen Elizabeth’s funeral. Amongst her many other virtues, she was known for listening and trying to understand a range of different opinions.

Perhaps the Amish can also teach us something about resolving conflict.

In 2006 an ‘English’ neighbour killed five little girls at an Amish school just a few kilometres east of the area we cycled through, before turning the gun on himself.

It was the Amish community’s response that astonished everyone. Within hours they reached out to the gunman’s family offering forgiveness and compassion, realising that they were suffering too.

So same same but different can be OK, at least in Lancaster County.

29 hours in the saddle

21 thoughts on “Same Same but Different”