Skip to content
Join 215 other followers
"Life is like riding a bicycle. To keep your balance you must keep moving." Albert Einstein 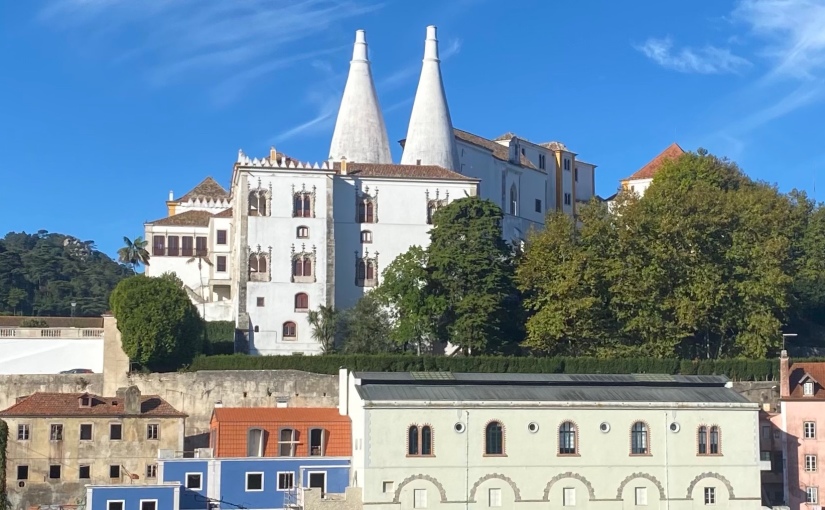 As you cycle south towards Lisbon three things happen:

1. There are lots more tourists around. Further north, we only came across intrepid French tour groups. Now there are people from everywhere across Europe, which makes for much more of a buzz!

2. You need more cash. Everything becomes that bit a more expensive. This is best explained by the Clare & Andy Coffee Index which we use to measure the relative cost of everything, wherever we are.

3. It becomes a lot more hilly. A lot! Our average daily climbing metres increased from around 300 metres to well over 700 metres.

One of the steepest hills we tried and failed to cycle up wound it’s way up to Sintra, a fantasy hill station just north of Lisbon and the summer playground of Portuguese Kings and various other eccentrics.

As Sintra is much too hilly for sightseeing by bicycle, we decided to hire Twizy … a little electric buggy that we could just about squeeze into together for a magical mystery tour around the various attractions.

First stop on the mystery tour was the Quinta da Regaleira, an extravaganza dreamed up by an Italian opera-set designer on the orders of a Brazilian coffee tycoon locally known as Monteiro dos Milhões (Moneybags Monteiro).

The villa is packed with ferociously carved fireplaces and Venetian glass mosaics but it is in the gardens where they really set their imagination free. Footpaths wriggle through dense foliage to follies, fountains, lakes and underground grottoes, all eventually leading to the Initiation Well that has now become a symbol of Sintra.

As you descend nine spirals of the staircase to a mysterious underground gallery at the base of the well, the nature of the initiation is never explained. But there are dark hints that it involved the rituals of the Knights Templar!

Next stop was the Palacio de Monserrate, a Moorish-Gothic-Indian romantic folly created by a wealthy Englishman in the 19th century and surrounded by gardens from all corners of the world … English roses to Mexican yuccas to Japanese bamboo.

Then onto the Convento dos Capuchos (Convent of the Hoods). Here monks lived a simple but well-ordered life in tiny hobbit-hole cells with low, narrow cork-lined doors.

But these cells weren’t cramped enough for one reclusive celibate, Honorius, who moved into a tiny burrow in the ground and stayed there for 36 years.

Mind you, he lived until 95 years of age, so maybe he knew a thing or two!

The Palácio da Pena is the antithesis of this spartan monastery. Built in the 19th century as the kings summer retreat, it’s a wacky, colourful confection of lilac and lemon towers, moorish domes and writhing stone snakes gazing across at a vast Moorish castle that became part of the estate.

Sintra is only 28km away from Lisbon.

However, as aspiring touring cyclists we decided to cycle 75km around the coast instead … just to take a picture at the lighthouse that marks the most western point in Europe.

As we cruised down a rewarding 12km descent and along the mouth of the Tagus river into Lisbon, we agreed the longer journey was worthwhile after all. As the famous bridge got closer and the city came to life, we jostled with an increasing number of cars, bikes, electric scooters, runners and tourists.

Each morning we were woken by the sound of old trams rumbling by. But we didn’t mind one bit … as this is the authentic sound of Lisbon.

Dating from 1930’s, they’re still the best form of transport to climb up and down the steep, winding cobbled streets of the old town. From time to time, the road narrows so much that pedestrians are squeezed into doorways as the tram rattles by.

Lisbon struck us as a city to hang out in … and there are lots of people doing just that. At pavement cafes, in parks and at Miradors (viewpoints) each of which came with its own busker playing Van Morrison or Ed Sheeran songs.

It’s also the city of Fado, a unique type of traditional music featuring soulful vocals, backed by the lilting sound of a 12-string pear-shaped Portuguese guitar and by a classical Spanish guitar.

The mournful lyrics are often about the sea or the life of the poor, and are infused with a sentiment of resignation, fate and melancholic yearning for the past. To some extent, Fado is a window into the character of the people here. This is captured by the Portuguese word saudade … a deep emotional state of nostalgia or longing for something or someone that has been irreparably lost.

As well as hanging out with everyone else, we did manage to drag ourselves along to what turned out to be the most extravagant monastery of them all. The Mosteiro dos Jeronimos was built to celebrate Vasco de Gama’s discovery of a sea route to India that would bring the country even more wealth.

It includes a room that pays homage to many of the most famous Portuguese kings, including the nicknames given to them by the people.

Peter I (1357-67) whose love story we described in the last blog, was know as The Cruel because of the nature of his revenge. And perhaps because his other nickname The Till-the-End-of-the-World-Passionate was rather a mouthful.

Others nicknames the kings probably liked include …

But these kings might not have been so sure …

After all this sightseeing in Sintra and Lisbon, it’s now time for us to get back on our bikes to cycle south through the sand dunes and coastal plains of the Alentejo.

We’re looking forward to it. After all, there’s no mystery about bicycle touring.