Most of Tasmania is green. Queenstown is orange. Mining has turned it into a moonscape of bare rock and eroded gullies.

Abel Tasman was the first European to sight the west coast of Tasmania in 1642. Surprised to see his compass behaving strangely, he made a note in the log that there may be “plentiful mineral wealth hereabouts”.

There was, but not of a colour people expected. Prospectors arrived some 240 years later seeking gold, but the quantity extracted did not match the extreme hardships they faced to find it. It was ‘fools gold’.

A few years later some canny metallurgists returned and found copper … lots and lots of copper.

Founded in 1893, the Mount Lyell Mining and Railway Company became famous as one of the richest copper mines in the world, producing more than a million tonnes in its 100 years of operation. But this came at a cost … blasting away the mountain and polluting the nearby Queen and King Rivers with so much waste that they won’t recover for another 100 years.

We stayed at Penghana, a British Victorian red brick that still dominates Queenstown from the top of a small hill. Now a B&B, it was once the mine manager’s private house. He had a special balcony built at the top of the house so he could smoke his pipe in the evening and still watch his precious smelters.

All the settlements on Tasmania’s west coast started out as mining towns. Tullah for lead, Rosebery for zinc and Zeehan for silver. Known as ‘Silver City’, Zeehan had a peak population of over 10,000 with more than 20 pubs. Today there’s one pub and only 728 people.

Strahan was not always the quaint little harbour town we’d so enjoyed. It used to be an extremely busy port taking the ore out to an insatiable world.

How did the ore get from the inland mining towns to the ships at Strahan? With great difficulty. They laboriously built a network of narrow-gauge railways, cutting through rocky mountain ridges and dense rainforest … all by hand. Despite an average speed of just 10kph, the steam engines became a lifeline for these communities.

The trains stopped working in 1963 when road travel took over. But in 2002 they were restored by a group of enthusiasts as a tourist wilderness experience, using the original locomotives. It’s not your average steam train ride, and has become so popular that the railway is once again one of the biggest employers in town.

Ironically many of these tourists visit Queenstown specifically to see the haunting orange landscape that is the legacy of a century of open-caste mining.

In complete contrast, Cradle Mountain is a natural beauty, pure and healthy. On a crisp, sunny day, we were lucky enough to see it in all its glory as we hiked up to Marion’s Lookout (1290m) and across to Ronny Creek.

Clare definitely made the right decision to get the bus from Strahan to Burnie and really enjoyed a few days morphing into a tourist.

Especially as all the locals really enjoyed telling Andy what a fool he was not to jump in the car with her! 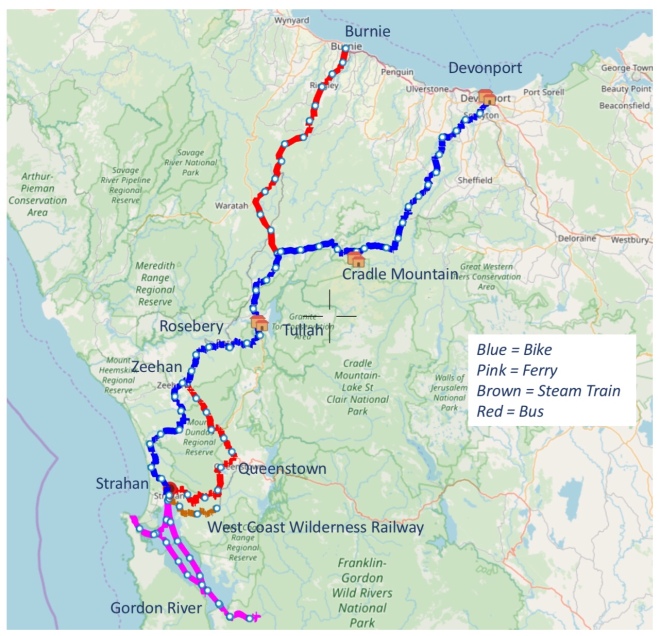 The cycling turned out to be even harder than expected. The first day’s ride from Strahan to Tullah was long at 85km and had a nasty sting in its tail.

The second day was only 56km from Tullah to Cradle Mountain but it was relentlessly uphill. The first 30km, followed the Murchison Highway which meant plenty of logging trucks roaring past at 100km/hour.

Those of you who follow professional cycling will be familiar with commentators dramatically announcing that a rider has “lost his legs!” as he falls behind the others. This is what happened to Andy on this climb, as he started to resemble Fabian Aru on a bad day. (Aru is known for his untidy, bobbing riding style and gurning expressions.)

The final day’s ride from Cradle Mountain back down to Devonport is normally a spectacular route through rolling hills and forests. But the weather gods must have decided that one sunny day was enough. They gave us cold, penetrating Irish mizzle instead. So cold in fact, that Andy put on two coats to try and stay warm.

In the early afternoon the clouds lifted, the rain stopped and this foolish cyclist was rewarded with a golden moment. Seeking hot coffee, he stumbled across the Tasmania Arboretum where he found several platypuses frolicking lazily in a pool.

Fittingly, the final descent wound through a magnificent Eucalyptus forest shrouded in mist. In Australia, we’ve seen thousands and thousands of Eucalypts, but they’ve never become boring. Papery blue-grey bark peals off in shreds to reveal a changing canvas of smooth white trunks highlighted with patches of yellow or orange.

Our route around Tasmania (clockwise from Devonport): 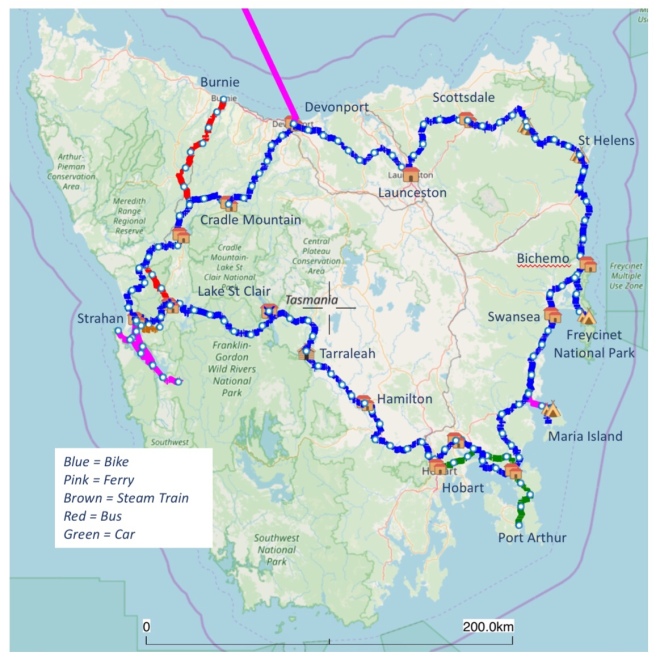 Tasmania definitely lives up to its reputation as a great place for a bike tour. Any tour come to that … by car, by campervan, especially by motorbike. It’s a beautiful and unspoilt island with lots of variety and without huge distances between places. The roads are in good condition with only light traffic and almost all the drivers are considerate to cyclists. Especially the logging trucks in our experience!

It is a tough cycling challenge, mainly because of all those hills. Perhaps that’s why we only bumped into 6 other touring cyclists.

The weather is variable at any time of year with plenty of wind and rain. We probably started 2-3 weeks too late in the season for perfect cycling conditions but were lucky to enjoy lots of nice days.

We’ve had no injuries, no illness and most surprisingly no mechanicals. Not a single puncture. Andy did spectacularly fall off his bike on a downhill near Hobart, landing in a petrol station forecourt but it was only his pride that was hurt. 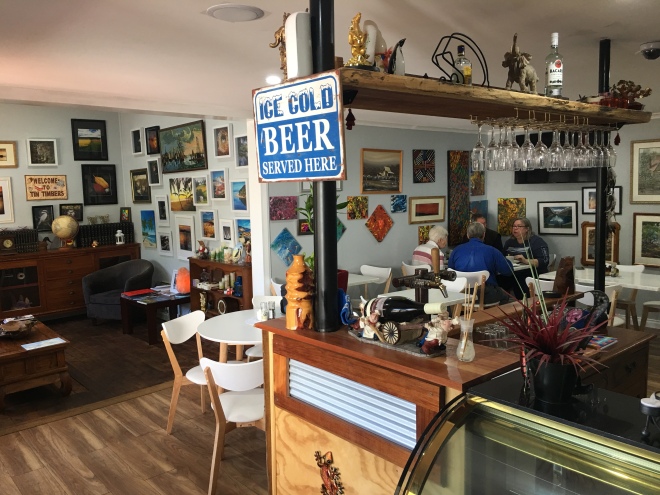 There’s lots of things for a cyclist to love about Australia …. impressive public toilets, great camping and accommodation, quirky community-run museums, incredibly good coffee. And brunches to die for!

In cities, the cafe culture is amongst the best in the world and there’s no tipping culture, as the staff are well paid. It’s all very straightforward and simple.

In rural Australia the food can be a bit more basic. But it’s the early closing time that catches people out. Last food orders are normally at 7:30, and by 8:30 a typical country pub is deserted. How do Spanish people manage?

On the flight back home we had a bit of fun by each listing our top five Tassie highlights. We were amazed to find they were identical: