“How about a cycling adventure on every continent?”

“What, even the really cold ones?”

“No, no … of course not. We’ve cycled in Europe and South America. How about Asia, Australasia, Africa, North America? Think how amazing that would be.”

We were sitting in a restaurant in Puerto Montt last March, at the end of our 1,478km trip through the centre of Chile and across the Andes to Argentina.

To be completely honest, Clare’s new found adventurous spirit came as a bit of a shock. It was only the week before that, after hours of grinding along the famous South American ripio (gravel roads), she’d emphatically declared that she was NEVER EVER going on a bike tour again!

It’s amazing what a large glass of wine and a sense of achievement can do.

So here we are in Australia, in Melbourne to be precise.

Our plan is to cycle to Sydney through 1600km (1000 miles) of remote countryside and coast roads.

Why have we chosen Australia?

Because our son, Chris, is studying in Melbourne for a year so it’s a great opportunity to visit him and tick off another continent at the same time. Our daughter Sarah was able to join us for a couple of weeks and the four of us had great fun together exploring the Great Ocean Road, the Barossa Wine Valley, the Grampians and Adelaide … travelling in the relative comfort of a huge motorhome.

Now it’s time for the cycling … and the camping. You may recall that we experimented with camping during our car-biking trip to Ireland in August using some heavy, old gear.

It wasn’t an unqualified success as it was very cold and windswept. Andy barely slept as every airbed he had pulled out of the corner of the garage deflated during the night.

It turns out that super-lightweight equals super-expensive so we will have to camp at least half the nights, just to make our investment worthwhile.

The biggest challenge has been squeezing all this extra gear into two panniers each. There’s a lot less room for the other stuff. Clare has found this particularly frustrating but she has reduced and reduced and then reduced some more … even decanting a few toiletries into tiny bottles and spices into small bags.

Regular readers of this blog will be pleased to hear that some old favourites are still with us. Andy’s favourite cycling shorts have been carefully repaired so no longer need safety pins to hold them up and Clare has bought a new, smaller hair roller … although it’s still a poor substitute for the lightweight solar powered hairdryer that she’d really like.

Before we came here, lot’s of people warned us that it can be difficult to bring bikes into the county. The government are rightly cautious about the risk of soil diseases entering Australia on dirty bike tyres. We heard horror stories of bikes being stripped down in customs and each part being soaked in a powerful detergent.

This meant that we were more than a little nervous when we picked up our bikes at the airport and headed for customs. But no worries! Just a cheery … “Have you given them a wash then mate?” … and we were waved through. 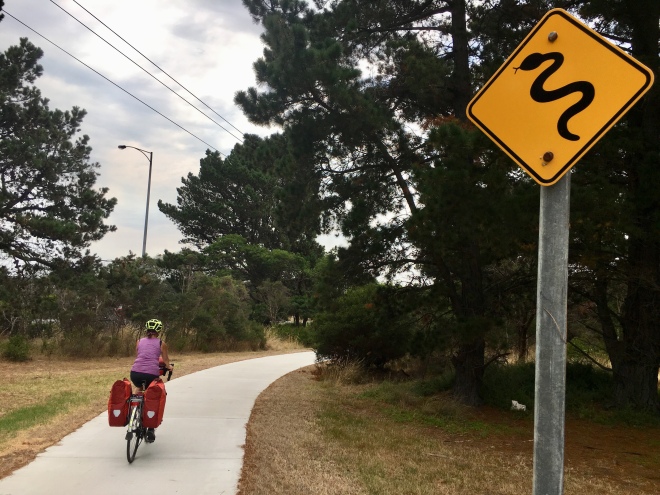 Apparently the whole country is writhing with highly venomous snakes that harbour a particular hatred for both cyclists and campers. And poisonous spiders that love to lurk under a saddle waiting for a juicy bottom.

It’s true … Australia is home to 21 of the world’s 25 most venomous snakes and a whole range of poisonous spiders. Andy has promised to shake out the shoes and check under the saddles every morning.

Since arriving in Melbourne, we’ve noticed that people talk about the weather almost as much as we Brits do. They proudly tell us that it changes so often, they regularly experience all four seasons in a single day.

Right now we’re enjoying perfect blue skies every day. But with huge changes in temperature. One day it’s a pleasant 24°C (75°F), perfect for late summer. The next day the mercury shoots up to a sweltering 38°C (100°F)!

Apparently, the high pressure that’s sitting over this part of Australia nudged over a bit towards New Zealand. This caused the winds to switch around. Instead of drifting up from the cool southern ocean they blew down from the red hot centre.

It’s set to stay that hot for the next few days which means we’ll be cycling out of Melbourne towards Philip Island and Wilsons Promontory in a furnace.

Maybe the heat will do us in before the deadly critters?

15 thoughts on “Cycling Down Under”