On Saturday 21st May 1927 Charles Lindbergh peered down from the cockpit of the Spirit of St Louis on his historic solo transatlantic flight to see the Three Sisters, small coastal peaks at the end of the Dingle peninsula. At last he had reached Europe!

The weather must have been better that day.

We pitched our tent in a full-on gale at Europe’s most westerly campsite, advertising a ‘view’ across to those same Sisters.

We used to love camping and have many fond memories of family holidays under canvas when our children were small. Mostly in the warmth of France. But we hadn’t tried it for 10 years.

So why are we camping now?

Because real touring cyclists camp. Because we think it might be magical. Because it will certainly be cheaper.

Before investing in a super-lightweight-cycle-touring tent, we decided to give it a go in Ireland with some of our old, heavy gear.

We imagined waking to a beautiful, calm dawn in a gorgeous bay refreshed from a full night of sleep and listening only to the sea gently lapping against the shore.

The reality was that we woke to another wet and windy day in a field full of campervans, sleep broken by our air-mat deflating and listened to the kids next door squabbling over their Coco Pops.

We managed seven nights, but it wasn’t an unqualified success. Camping is not that popular in Ireland … probably because it can be a teeny bit wet. 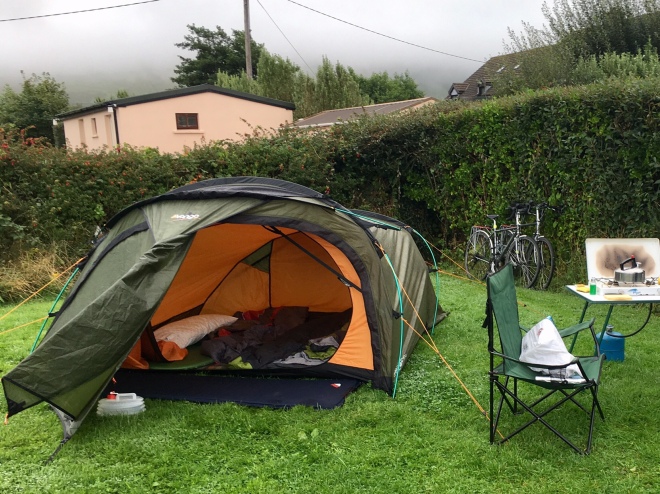 The Dingle Peninsula is said to be one of the most beautiful in Ireland. But we didn’t really see it.

Heavy cloud had settled languidly over this part of the country, putting its feet up and refusing to move on. And with the clouds came the gentle Irish rain that feels so soft and seeps into every fold of clothing.

Not the best weather for cycling.

So instead, we headed into the town of Dingle to see what it had to offer. It turned out to be a lot.

The Dingle regatta was in full swing, with rowers braving the rain to race naomhóg, traditional boats made of tarred canvas stretched over a wooden lattice.

In the evening, we saw a one-man play about the life of a local fisherman and his deep connection to a dolphin that appeared off the coast and never left.

This is based on a truth … there is a bottlenose dolphin in Dingle harbour called Fungie who has been entertaining visitors for 32 years.

The pubs of Dingle are famous for their music, their character and their window displays. 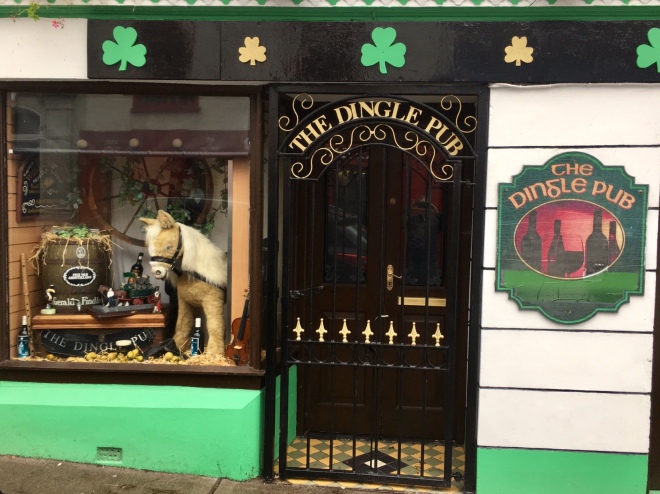 They were all full on this Saturday afternoon for one of the sporting occasions of the year – the All Ireland Hurling Final.

So we became sons and daughters of nearby Limerick for a day cheering on their team against Galway, the defending champions. Making the final was a very big deal for Limerick as it is 45 years since they last won.

Hurling players use a wooden stick called a hurley to hit a small ball called a sliotar between the opponents goal posts. These look like a football goal with two rugby posts on top. Hit it in the net for a 3 point goal, hit it over the bar for 1 point.

At the end of normal time Limerick were leading by 8 points, a huge margin. But as the referee indicated eight minutes of injury time, the green shirted fans around us started muttering about the curse of ’94 when they had lost to Offaly from just as strong a winning position.

It could … in injury time Galway roused themselves to score again and again and again. Limerick wobbled but to tears of relief all round, they managed to score the single point they needed to cling on and win.

Hurling is an incredibly fast, tough and skilful sport. It’s a sport that almost makes us wish we were Irish.

We only managed one 40km bike ride around the end of the peninsula but it was just as beautiful as we were promised with views out over the Blasket Islands and lots of fascinating local history to discover.

We especially liked the moodiness of Brandon Creek where St Brendan and 14 monks are reputed to have set off in a small boat sometime around AD 535 to cross the Atlantic and eventually reach Newfoundland, stopping at islands along the way (Hebrides, Faroe Islands, Iceland etc.)

To prove it was possible, this journey was repeated  in 1976 by Oxford graduate, Tim Severin, who made the journey in a replica boat made out of wood, flax, oak bark and wool grease.

Not made of such stern stuff, we have to admit we were defeated by the Dingle.

We drove more that we cycled. And we failed to ride over Conor Pass, Ireland’s highest, as it was blowing a gale in thick cloud at the time.

On the last morning the sun came out at last. We woke up to see the Three Sisters in all their glory through the flap of our tent. As we sat on the lush grass, drinking coffee and listening to birdsong it almost felt like a moment of magic.

So we hope to come back one day to see the Dingle properly in the sunshine.

And we might rediscover the joy of camping after all. The jury’s still out on that one.

7 thoughts on “Defeated by the Dingle”