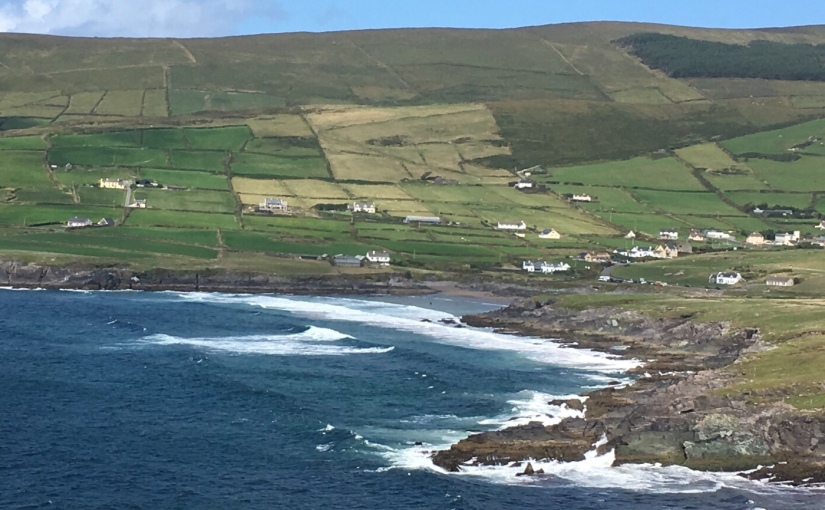 Everyone warned us that the Ring of Kerry is far too commercial. Full of visitor attractions, souvenir shops, cafes, galleries, even pubs serving all-day breakfasts!

And the coaches! Scores of them carrying tourists anti-clockwise around the ring every day from Killarney. “They’ll knock you off your bikes, so they will!”

“If you must go by bicycle, go anti-clockwise but start in the afternoon when the coaches have gone.”

“You should always cycle clockwise, against the traffic. It’s for your own safety.” 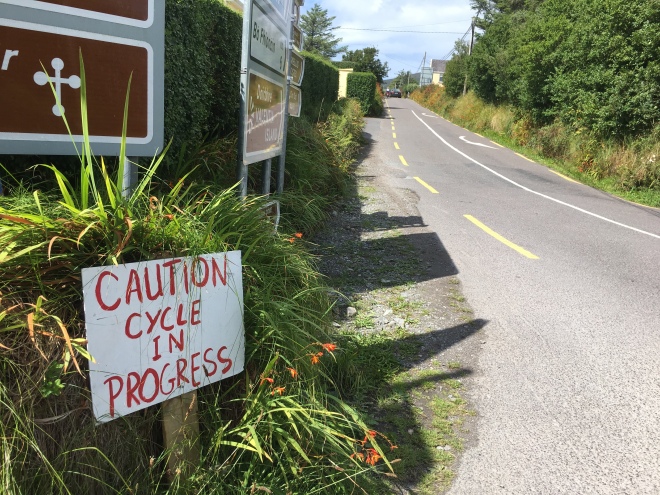 With these warnings ringing in our ears, we decided to drive around the peninsula by car before setting out on our bikes. We were especially curious to check out the mountainous middle, inside the famous ring.

It turned out to be spectacular.

Big country. Untamed. Full of lakes, woods, rugged mountain passes, hill farms and brightly coloured sheep. And it was empty – there were very few people and no coaches.

We couldn’t wait to cycle through it! 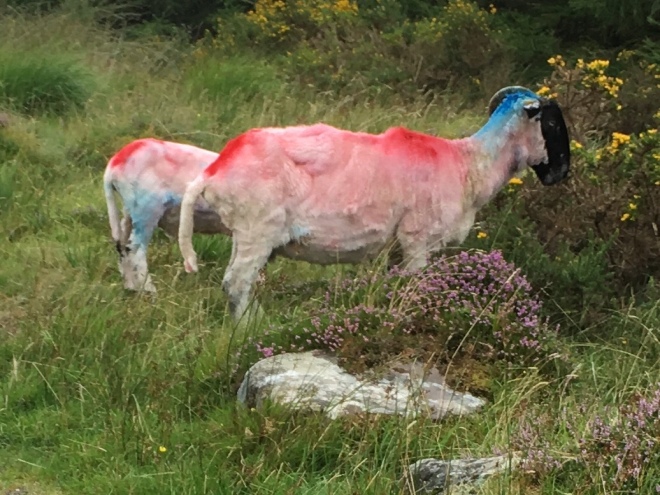 We drove up to Moll’s Gap and ‘Ladies View’ which announces itself as ‘the finest view in Ireland’.

Feeling inspired, I thought it would be fun to cruise downhill on my bike to the quaint little village of Sneem, about 20km away, while Clare drove ahead in the car. I imagined freewheeling through beautiful countryside in golden early evening sunshine.

The wind was so strong that my bike almost stopped whenever I tried to freewheel and I ended up pedalling furiously however steep the descent. It was also a bit of a shock to come across a fairly substantial climb half way down.

This meant it was a red faced and bedraggled cyclist that limped into Sneem some time later to find Clare chuckling into her cappuccino.

We left our car in Waterville, near the end of the peninsula, for the start of our three day tour around the Ring of Kerry. A small backroad took us (clockwise) across to Valentia Island in the far north-west.

Too small for coaches, this road featured several switchbacks that were so steep we both had to climb off and push our bikes.

But it was worth it. From the top of the ridges, there were great views out to the remote Skellig islands which have featured prominently in two Star Wars films (The Force Awakens and The Last Jedi) due to their other-worldly appearance.

The human story of these islands is arguably more extraordinary than a Star Wars plot.

Monks arrived in the 7th century looking for places where they could get closer to God through isolation and extreme hardship. They built a church at the wild and windy summit and then cut 670 stone steps to scramble up to it. Sleeping in small stone beehive huts, they lived off fish, birds and rainwater. Despite being raided fairly regularly by Vikings, they continued in this way for about 600 years.

That evening we stayed at Kells House & Gardens, a botanical oasis nurtured by a succession of gardening enthusiasts for almost 200 years. It includes an extraordinary ‘Primeval Forest’ of huge tree ferns, mostly imported from Australia in the 19th century and still thriving today in the mild local micro-climate.

Day two was the big one, venturing inside the ring to climb the Ballaghbeama Pass on our longest cycle so far at 82km with 855m of climbing.

Despite cloudy, mizzly weather it was one of the most memorable rides of this Irish carbike tour. The road snaked up through a narrow, rocky gorge then opened out into a much wider valley as we cruised down the other side. Wild and remote, yet still and peaceful.

This part of Kerry is an International Dark Sky Reserve as there is so little light pollution. Apparently, on clear moonless nights the sky is revealed in all its glory. (If there are any clear, cloudless nights that is!)

That means stricter controls on development, so the raw, untamed quality of the land inside the ring should never change. 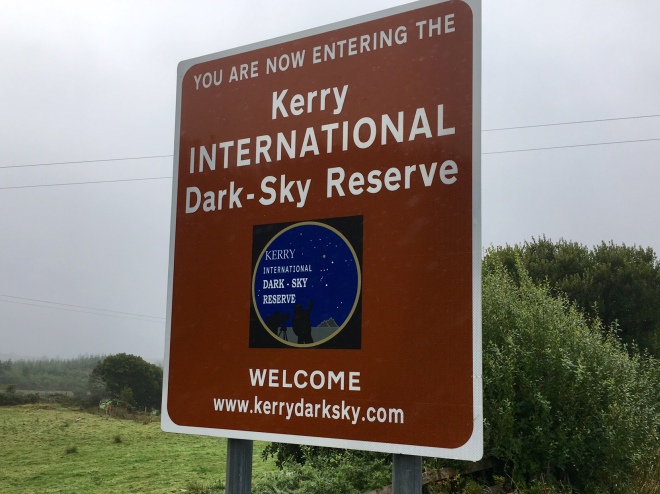 On the final morning, we only had 35km to ride back to Waterville over the Coomakista pass which has, yes … ‘the finest view in Ireland!’

But we couldn’t see a thing, as the cloud had come right down to kiss the sea, enveloping everything it touched in fog and drizzle.

Luckily for us, we’d already seen this view in its full glory from the car a few days before!

Whilst not as authentic or untouched as the Beara peninsula, we didn’t find the Ring of Kerry as commercial as we’d been warned. It’s a lovely place and a great day out for all the people who jump in a coach in Killarney and then spend the day touring around it, enjoying the sights and the all-day breakfasts!

But we were grateful for the warnings. Without them, we would never have discovered the high country inside the ring.

If you’re seeking unspoilt beauty that’s different to the normal tourist routes, then this is the place for you. By bicycle or by car.

6 thoughts on “Inside the Ring of Kerry”