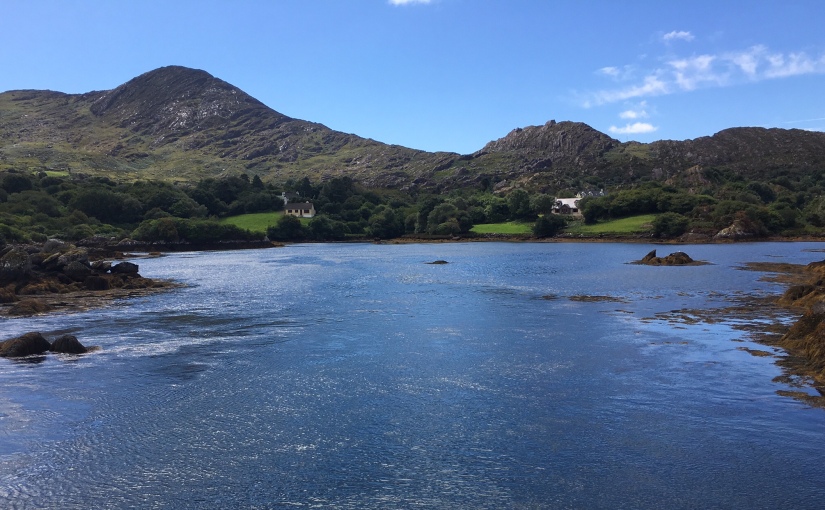 In April 1999 the late Pete McCarthy, born in England but of Irish parents, visited the Beara peninsula as part of a quest to understand a country he found so familiar and at the same time so unfamiliar.

As he travelled through Ireland, he made a point of never passing a bar with his name on.

This led him through the door of Adrienne MacCarthys Bar in Castletownbere. It was her birthday and the celebrations slowly turned into one of those spontaneous nights that only finish with bacon sandwiches at dawn.

It was such a memorable evening that he put the pub on the cover of his funny, poignant and insightful book which went on to become a surprising best seller. I can vividly remember staring at this book cover dreaming of long evenings of Irish craic. 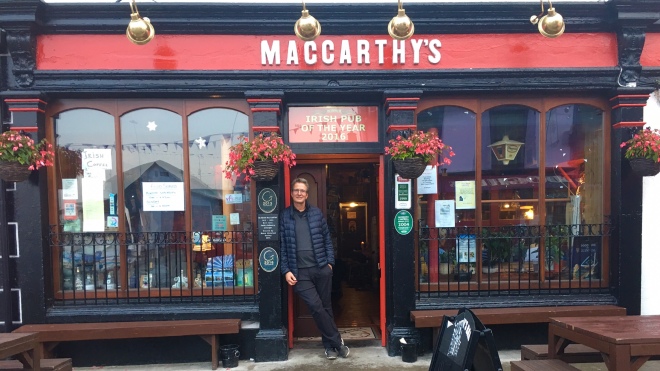 This photo is a poor effort to replicate that cover. Those of you who are familiar with it will note that there are some vital elements missing from Pete’s version … no hat, no dog and no nun drinking a pint.

Today, there are few signs that this is the same bar. No neon signs or banners in the window. It was only when we spotted a small poster in the back room, that we realised it was the same pub.

The front half is a grocer’s shop stocked with Weetabix, spam, baked beans and toilet roll although we didn’t notice a single purchase.

The back half is more familiar as a bar and is decorated with a wide variety of memorabilia including a range of gifts from visiting European fisherman. It’s chaotic, homely, warm and welcoming. 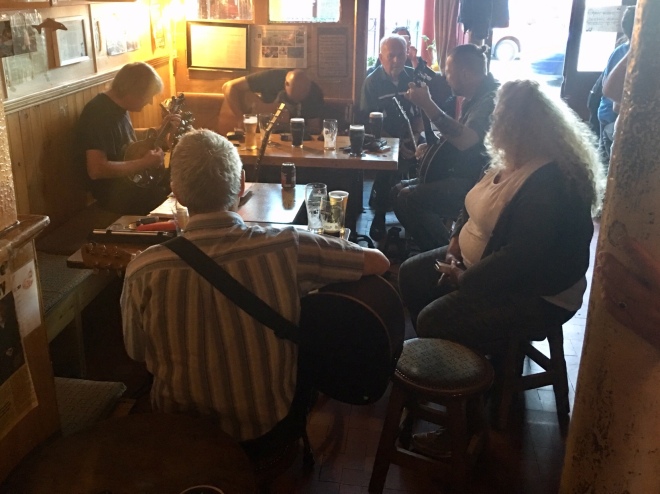 We spent two happy evenings there, singing along with the local folk club and chatting to Adrienne, listening to her tales of life in this small town which has grown to become the biggest white-fish port in Ireland.

She told us of the mobile cinema that came with the latest blockbusters complete with authentic faded red velvet seats; of Zumba dancing classes in the bar in the winter; of brides pouring pints for their wedding photos and of the homesick Spanish fishermen pouring out their hearts.

All this while drinking my favourite Irish beer … Murphy’s. It’s like Guinness, but silkier, lighter, smoother. Pure nectar! Only in Ireland though … I tried it once in London and it doesn’t travel well. 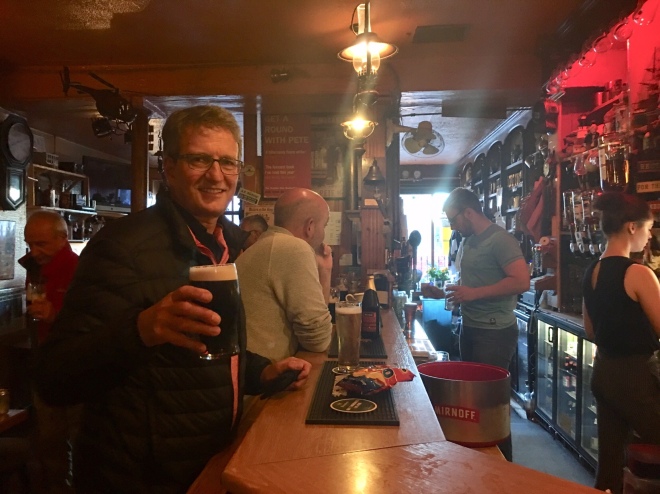 As well as drinking we did manage some cycling.

Leaving our car in Kenmare, we took three days to pedal around the beautiful coastline, travelling about 60km each day. 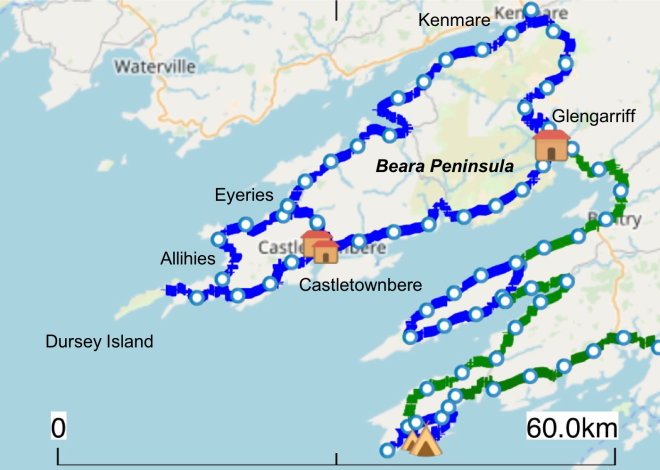 The Beara Peninsula was named for Princess Beara, Spanish wife of Eoghan Mor the legendary King of Munster. It has a wild, raw, authentic quality with less tourist trappings than its more commercial cousins further north.

We rode up and down to Dursey Island at the far end of the peninsula, where the narrow channel is too dangerous for boats to cross, so an ancient cable car takes visitors across. Once a Viking holding camp for slaves before they were shipped to Scandinavia, the island is now a gentler place, mainly attracting hikers.

The Dzogchen Beara Buddhist meditation centre serves delicious coffee and apple pie to go with their many interesting retreats. They’re building Ireland’s biggest Buddhist temple at this beautiful site and hope the Dalai Lama himself will come to consecrate it.

The beautiful, rugged stretch of road that links the colourful villages of Allihies and Eyeries was one of the most exciting rides we’ve ever had. It felt like being on a roller coaster, full of switchbacks and short sharp climbs.

These two old copper mining villages really stand out (even in the mizzle) as most of the houses have recently been repainted in bold, vibrant colours. Once drab and ordinary, they now attract visitors to their coffee shops and bars. It’s a clever way to entice people to get out of their cars.

To get back to our car we had to tackle our first serious Irish hill. At 320m high, the Caha pass isn’t as high as our rides through the Andes or Pyrenees but it offered some spectacular mountain views, an interesting tunnel and the thrill of an 18km descent down to Kenmare.

Overall, we really enjoyed the Beara – both for the cycling and for the beer!

Thank you for your thoughts on the best word to describe bicycle touring with a car. Bikedriving was popular but carbiking just came out on top.

So carbiking it is, except that we didn’t go carbiking around the Beara. We cycled all the way!

7 thoughts on “Great Beer on the Beara”