“Ahhh … don’t you be worrying yourself. This is Ireland … the sun will be out at five o’clock … you’ll see if it isn’t”

It was 4pm and this seemed a little optimistic, even for a local expert.

The three of us peered into the gloom from the top of a tower at Old Head, trying to catch a glimpse of the sea just 30 metres below. But it was impossible, the thick fog wasn’t going anywhere.

We were standing on one of 81 watch towers built between 1804 and 1806 to look out for Napoleons ships. It’s now a memorial to the 1198 people that sank with the Lusitania when it was torpedoed during the First World War.

Of course, our local weather expert was right. Just one hour later we found ourselves rolling into the pretty town of Kinsale in picture perfect evening sunshine.

With a stroke of good fortune we arrived just in time for the final of the ladies pillow fighting competition. This major sporting event had drawn a big bank holiday crowd to cheer on the winner as she sent her unfortunate opponent plunging into the harbour.

Kinsale is at the southern end of the Wild Atlantic Way, the longest coastal touring route in the world and well known as an epic bike ride. From Kinsale, it winds its way 2500km up the west coast of Ireland to Donegal in the far north. 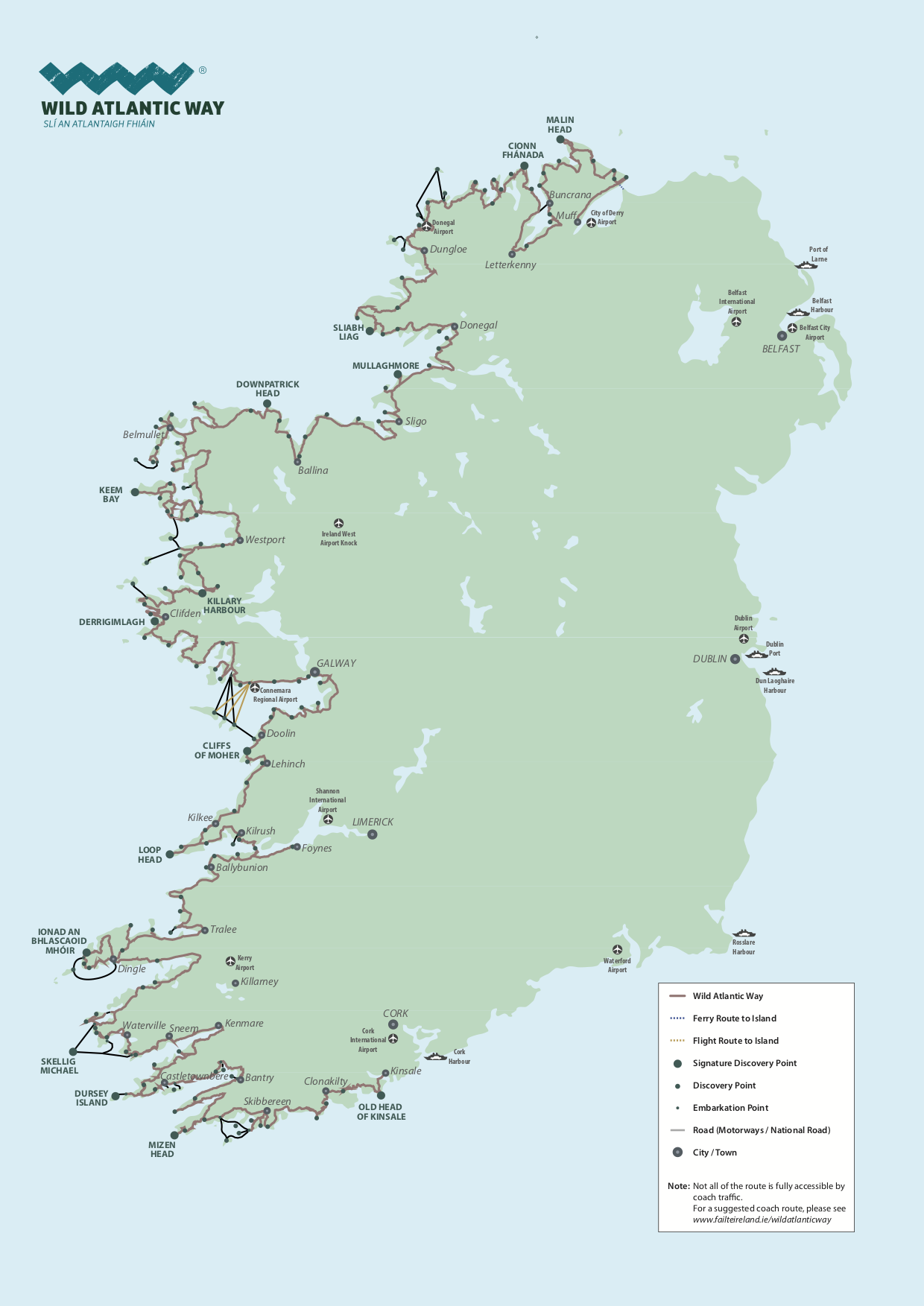 Our plan for the next 4 weeks is to cycle the southern half as far as Galway and hopefully come back to complete the northern section another time.

To be honest, we’re not only cycling this time. We have our car with us which means we can drive along the main roads and then cycle around each peninsula.

Well perhaps it is … a bit. But we will be cycling more kilometres than we drive. And we still have our panniers with us as some of the rides will last three days or more.

We’ve been searching for the name for this type of bicycle-touring-with-a-car but haven’t been able to find one. So here are a few suggestions:

Car-cycling as in “They really enjoyed their car-cycling holiday in Italy.”’

Bikedrive Touring “I’ve just come back from a great bikedrive across Canada.”

Or a French one: Velo-en-Voiture (bicycle by car) “He always goes for a long velo-en-voiture through France in August.”

What do you think? Which one works best? Does anyone have any other suggestions? Maybe this is a chance to create a new word.

Before setting out we enjoyed three days on Heir Island near Skibbereen staying with some old friends, Helen and Dave, in their lovely cottage.

There was, however, one unfortunate incident while we were there!

On the first day Andy (who is not known for his agility) capsized this little yellow boat in just one foot of water, tipping Clare and more importantly her phone into the cold, murky sea. Clare survived but her phone was not so lucky. Despite leaving it in rice and blasting it with the hairdryer it has stubbornly refused to work.

Oops! This was not the best start to a few weeks cycling around Ireland as a happy couple!

Since waving goodbye to Helen and Dave, we’ve enjoyed five delightful one-day circular rides around the Haven Coast, the most southerly section of the Wild Atlantic Way.

There have been many highlights.

Pedalling around a corner to discover a remote, unspoilt cove. Learning about life as a lighthouse keeper on the Fastnet Rock. Visiting lively bars in quirky towns. Coffee and cake in beautiful places like this castle at Castletownshend.

Most spectacular was our ride around Sheeps Head, the least visited of all the peninsula’s.

A walkers paradise, it has a raw, rugged beauty especially on the north coast which has a spectacular view of Bantry Bay.

But beauty always comes with a price and we paid ours on the way back over a big hill to our car. The road went in a straight line up a series of steep ramps with brief flat sections in between. It was like interval training!

So far, cycling in Ireland is even better than we thought it would be.

The scenery literally takes your breath away at times. From soft pastural farmland and gentle rolling hills, to rough craggy heaths and rugged coastline. From wide estuaries full of wading birds to azure blue harbours dotted with colourful dinghies.

At this time of year, the hedgerows form long avenues of wild flowers. Orange montbretia, red fuchsia, purple loosestrife all set against a backdrop of lush, green ferns.

We’ve had the normal mixed bag of weather with lots of cloudy days but also plenty of sunshine. The wind has often been brisk but it blows in fresh Atlantic air that cleans our lungs. On a well-planned route it also blows us home at the end of the day.

It is quite hilly. We always seem to be going up or down, but they are not too steep nor too long. This is fortunate as we were very unfit when we arrived. It turns out you can’t get fit for cycling simply by lying on the sofa and cheering on Geraint Thomas to win the Tour de France! 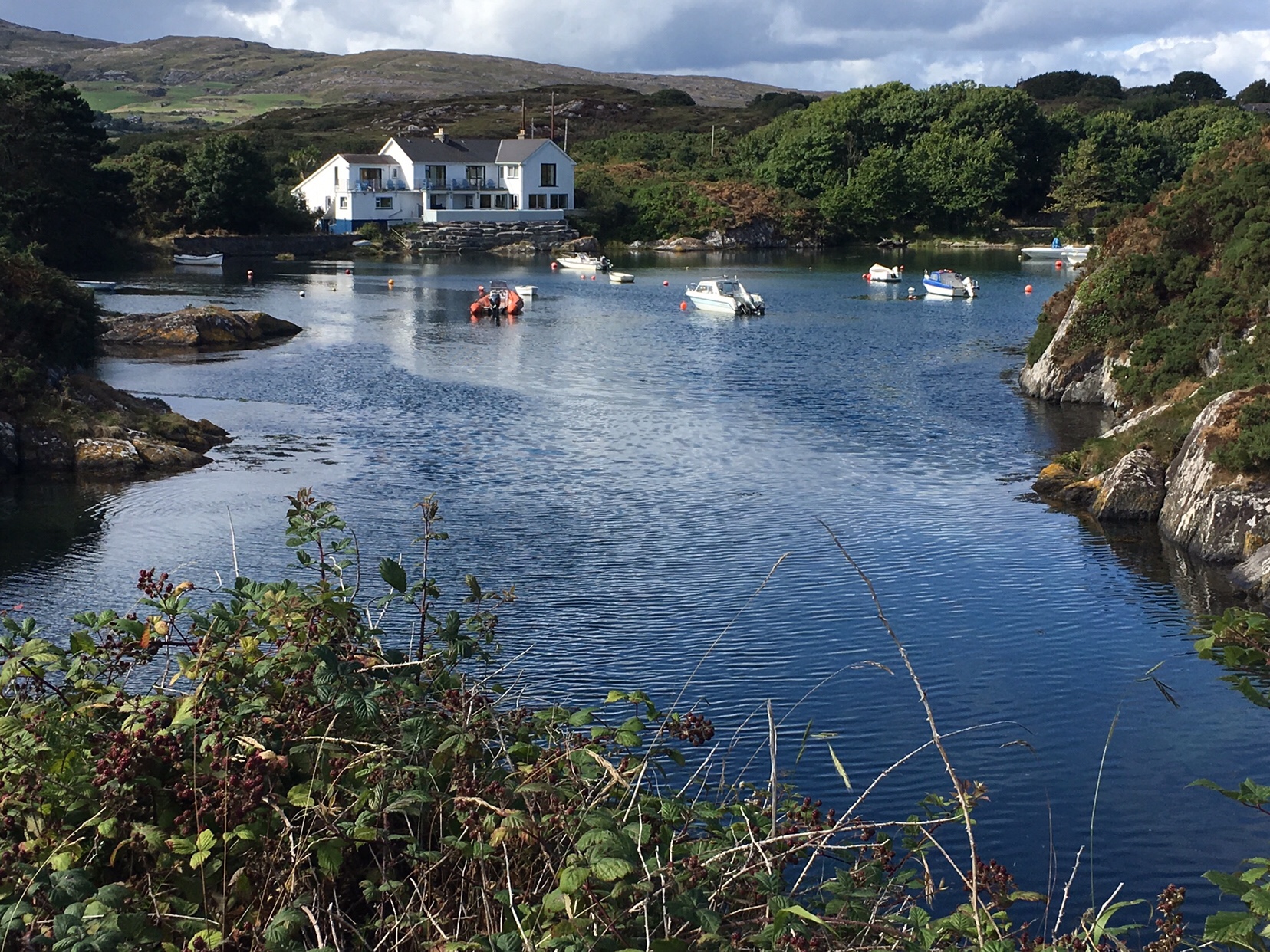 The quality of the backroads is very good and there aren’t too many potholes to avoid. Less than England, more than France. Irish drivers are particularly considerate to cyclists, hanging some distance behind and being very patient about overtaking. I guess Irish people are famous for never being in a hurry!

They’re also famous for their friendliness and we’ve been lucky enough to enjoy the soft embrace of Irish hospitality on many an evening.

We’re now looking forward to exploring more of the Wild Atlantic Way over the next few weeks.