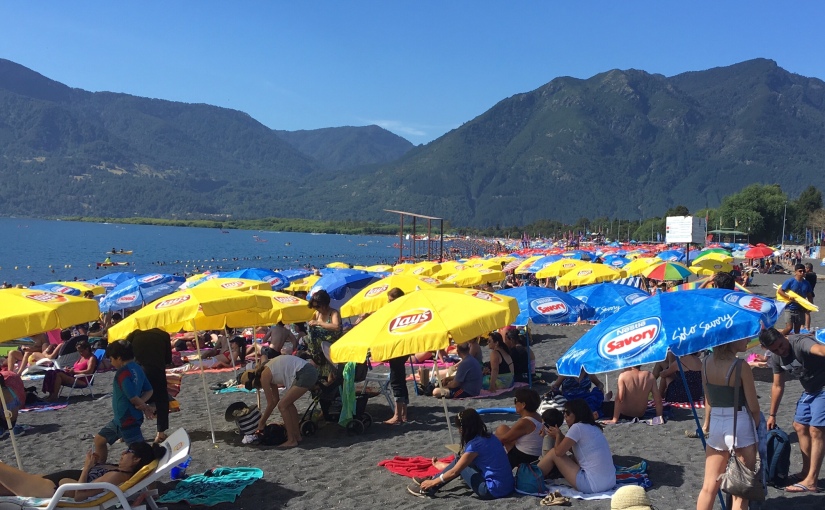 One of the great things about travelling slowly through a country for the first time is that there are always things about everyday life that are normal to locals but surprising to a visitor.

Here are a few of our favourite curiosities from Chile:

Making the most of every beach
On the cold Pacific Coast families played in the surf or sunbathed in coats and sleeping bags while further south in the mountains we were surprised to find a little piece of Rio. In Pucon thousands of holidaymakers flock each January and February to this beautiful black volcanic beach on the shores of Lake Villarrica. It isn’t a peaceful experience … hundreds of hawkers tramp up and down selling everything from rubber rings to that ideal beach snack, Mote con Huisillo.

Shopping
Shopping in chain stores is the same here as anywhere else in the world but it’s a completely different experience in small local shops and bars.

Let’s say we’re buying some lunch in a Panaderia (bakery).

You start by telling the assistant what you want. She writes it down and gives it back to you. Then you take the order to a stern looking lady in the caja (cash booth), hand over your money and she gives you a different receipt. With this you return to the counter and give the receipt to the assistant. She studies it carefully, picks out what you want and eventually hands it over.

It’s a long process for a couple of empanadas!

Nescafé is treated like gold
Whilst there are lots of lovely cafes in the more touristy towns, the rest of Chile has yet to fully embrace the global coffee culture.

Coffee here is usually made from weak instant powder but what it lacks in flavour is more than made up for by the ceremony. Nescafé, milk powder and liquid sugar are solemnly brought to the table so you can mix the ingredients exactly to your taste in tiny china cups. Only when you’re satisfied you have the right combination will the waiter carefully add hot water.

In several supermarkets we’ve even found a locked cabinet containing ‘special goods’ … in this case bars of chocolate and yes, jars of Nescafé. Regular, not even Gold Blend!

Comfort Food
Whilst we’ve enjoyed lots of delicious fresh fish and meat, some Chilean food could be described as hearty or even stodgy. Many dishes are accompanied by large quantities of bread and rice and chips.

It seems to us that some popular foods simply remind people of a visit to their grandmother on a Sunday afternoon.

Two girls from Santiago told us about Manjar, a delicacy that no self-respecting Chilean would ever be without (they had a jar in their backpacks). “Have you tried Manjar yet? … No? … Well, have you eaten Nutella? … Yes? … Honestly, that stuff tastes like sh*t compared to Manjar!!”

With this glowing endorsement we rushed to a supermarket to find that whilst it’s not made from chocolate and hazelnuts, Manjar is indeed a sweet spread. The recipe is condensed milk and sugar so it’s basically a spreadable fudge. A delicious reminder of tea with Grannie!

Sunday morning entertainment
Whilst the enjoyment of all this comfort food has become obvious in a few Chilean waistlines, we’ve found them to be really warm, friendly people. Sometimes a little shy and reserved to start with, they’re always polite and genuinely kind to strangers. We’re in no doubt that we’d get plenty of help should we get into any trouble on our bikes.

Chileans are rightly proud of their culture and heritage. This traditional dancing demonstration on a Sunday morning after church was not for tourists but for the sheer joy of it.

Street Signs
Some of the street signs have kept us amused, perhaps because we’ve not been to parts of the world that need to advertise evacuation routes from volcanoes or tsunamis.

More confusing has been the absence of no-entry signs which has fooled us a few times. Instead there’s a polite arrow on the street sign indicating the direction of travel. Only in extreme examples do they feel the need to use a more forceful sign. 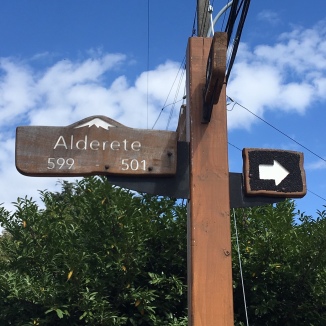 Street Dogs
Rubbish bins are placed on platforms all over Chile. 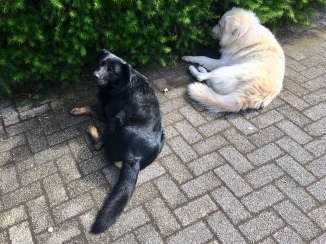 This was a mystery to us until we realised it was to keep the trash away from the enormous number of stray dogs (2.5 million by one estimate). Unlike street dogs we’ve seen in other countries they appear to be relatively healthy, well fed and docile. We understand this is because neighbourhoods feed and care for them as unofficial communal animals.

Cycling on Highways
There’s one big highway (Ruta 5) that runs from North to South as the main artery through the centre of Chile, traffic flowing at over 100kph. We were surprised to discover that it was both legal and common for cyclists to ride down the hard shoulder, sometimes for long distances.

We were only brave enough to give it a go for a quick 20km dash when there was literally no other road. It was unsettling to have trucks and buses passing by at such high speed but good fun to go through the toll booths at no charge.

Carmenere and Pisco Sour
Carmenere red wine has been a pleasure to drink. This was a grape variety from Bordeaux that was wiped out by the 1867 phylloxera plague and thought to be extinct. As it happened, cuttings had already been brought to Chile but they were mistaken for Merlot for over a century. Carmenere was only ‘rediscovered’ in 1994 and is now the darling of the Chilean wine industry.

Our favourite drink in Chile is fast becoming Pisco Sour, a cocktail made from pisco (a type of grape brandy), lemon juice, syrup and ice. The stronger Peruvian version adds egg white and Angostura bitters and is also very popular here. We think both are delicious … especially as a sundowner after another cloudless day.

So raising a glass of Pisco Sour we say salud to Chile and its many curiosities. Leave a Reply to Clare and Andy Cancel reply