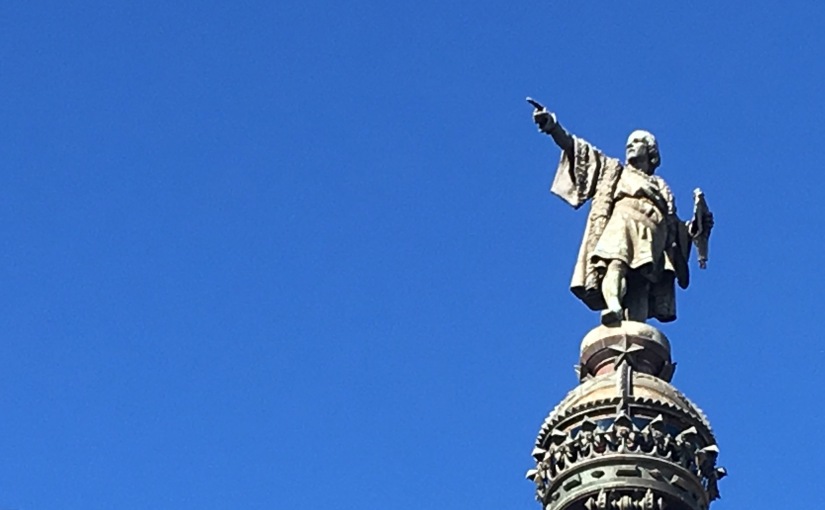 It felt like the only thing to do. The right thing to do. Waking up on our last day in Barcelona we cancelled plans for more museum tours, dug the bikes out of the hotel basement and took them on one final ride around the city. They were delighted to be out in the fresh air … and so were we.

We showed them all the city sights including the Olympic Stadium, Las Ramblas and the Mediterranean beaches where we all gazed out to sea dreaming of future adventures together.

It turned out to be our favourite day in this magical city – better than the Gaudi, better than the old city, better even than the great restaurants. Perhaps this means all four of us (two bikes & two people) have now officially caught that notoriously infectious bicycle-touring-bug.

Then we collected some large cardboard boxes from a local bike shop (ones that new bikes come in) and carefully packed them up. A daunting prospect beforehand, this ended up much easier than we had expected.

Here’s all we did: 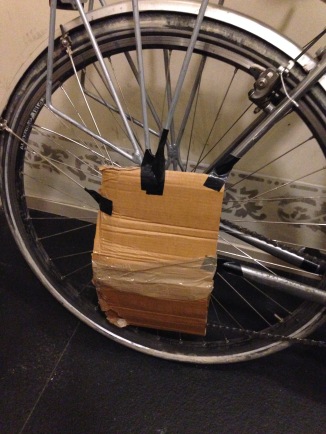 The main problem was filling the space around the bikes so they didn’t rattle around. Stuffing our clothes and panniers down the side wasn’t enough until Clare came up with an inspired idea to pad the space with lots (yes, lots) of kitchen roll, which was light and exactly the right length.

The bike boxes just fitted into a large taxi to the airport and Easy Jet looked after them nicely on the flight to Bristol. We were rescued from an airport rebuild by Andy’s parents who squeezed us into their small campervan for the journey back to Bath.

Frank Sinatra once sang
“… it’s oh so nice to go trav’ling, but it’s so much nicer to come home …”

And it was … home cooked food, a familiar bed, even catching up on 8 weeks of Strictly Come Dancing!

Having never been away for so long before, we were surprised that some appliances had stopped working in our absence. A flat car battery was predictable but the washing machine had also gone on strike as the pump was jammed by sediment that had slowly settled during the last two months.

Encouraged by his new bike maintenance skills, Andy decided to fix it himself but only managed to flood the kitchen twice before giving up and calling a plumber. A reminder of those early puncture repairs but at least all that Spanish kitchen roll came in handy!

As we arrived home, Bob T sent us this lovely phrase from Little Gidding by TS Eliot:

“We shall not cease from exploration
And the end of all our exploring
Will be to arrive where we started
And know the place for the first time.”

After living for so long in our bicycle bubble, coming home did feel a little like that. We briefly looked at Bath through the eyes of a visitor – as a beautiful and distinctive Georgian city that’s feels like a great place to live. It was good to be back.

As I’m sure you can tell, we’ve both loved our first bicycle tour and would recommend the sense of freedom it gave us to anyone.

Talking to many of our friends it seems that men are often (not always) a bit keener to go on a bike tour than women are. So for couples like us, no longer in the first flush of youth and who haven’t done lots of cycling before, here are Clare’s ’12 top tips’ to help other women enjoy it as much as she did: 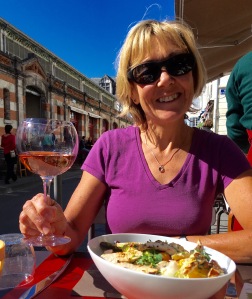 Thank you for following this blog over the last two months and for all your encouraging comments. Here are just a few of many that made us laugh:

“Cycling is life with the volume turned up.”
Dave H

“Fab inspirational effort. I am planning to cycle into town tomorrow… and back …”
Jonathan S 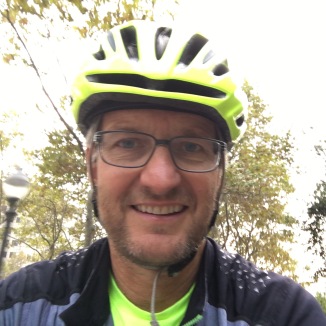 “What with beard and fishnets, I think Andy is having a retro Kenny Everett moment … and it’s all in the best possible taste!”
Maggie C 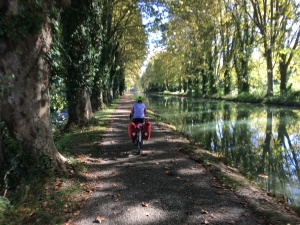 “Canal paths are like fish and chips, nice to start with but then too much and rather boring.”
Judith D 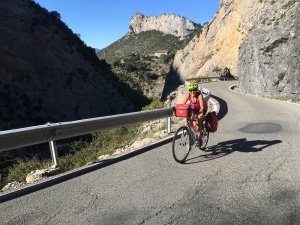 “Go over the mountains or you will regret it forever. However you will probably curse me all the way up the first 3 hour climb!”
Mark F
(He was right on both counts.)

There have been a few unintended consequences from our trip:

So what’s next for us? Now that we have caught the bicycle-touring-bug we plan to do lots more in future. Our bikes are keen too – here they are dreaming of those future adventures on the beach in Barcelona. 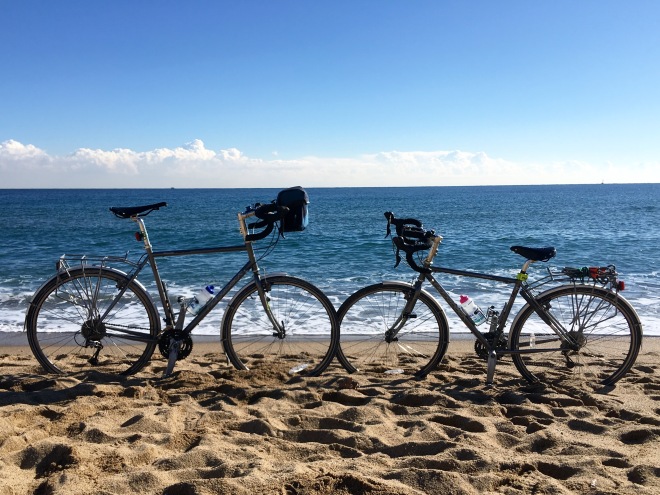 We’ll let you know when the four of us are ready for the next one. Until then … happy pedalling!

10 thoughts on “To arrive where we started”